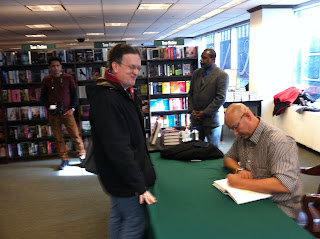 I had the pleasure of meeting the great Terry Francona at a book signing in Manhattan yesterday.

Fortunately, we all lined up inside the Barnes & Noble store on 54th Street and not outside. (It barely hit 20 degrees.) There had to be at least 100 people in the line, many wearing Red Sox hats and shirts. I met my friends Gareth and Mel (with her young son), and to my surprise, they were the only folks I recognized.

I was in line about 30 minutes when I finally got a few moments with The Greatest Red Sox Manager In My Lifetime. He autographed his new book, and I said the same thing I said to John Henry and Tom Werner (who are no longer Tito's best friends) when I met them at Professor Thom's in 2007: "Thank you for making my life in New York City so much more bearable." I got a laugh out of him, as I did Henry and Werner.

I shook hands with him and wished him all the best in Cleveland. Also there was his Tito's co-author, Dan Shaughnessy. As you know, CHB is not one of my favorite people, and I want nothing to with him. I had the opportunity to meet him at Foley's Bar in Manhattan a number of years back and passed on that as well. As I was waiting in line, I noticed there were actually fans, who after meeting Tito, went up to CHB and had him autograph the book and took photos with him.

Ugh. No thank you.

I will read "Francona: The Red Sox Years" with great interest. The excerpts I have already seen have been pretty juicy. I'll have a review of the book before the season begins.
Posted by The Omnipotent Q at 11:21 AM

Glad to see that you had the chance to meet him. As a Yankees fan it seemed to me that the balance of power shifted in the Yankees/Sox rivalry not so much b/c of changes the Sox made in on-field personnel but instead b/c of the change they made in the manager's office.

I have my doubt that Aaron Boone ever would have had the chance to swing the bat in extra innings against Tim Wakefield had Francona and not Little been your team's skipper in '03.

I hope Francona does well in Cleveland. I hope you enjoy his book as well.

Yes I too am not a fan of chb. Yes looking forward to hearing about some of the specifics of 2011 collapse. How many days left until truck day

Truck Day is February 5th, Rick, so that would be a week from this Tuesday. Bring it on!

Thanks Adam. I wished Tito well in Cleveland. It will take him time, but I bet the Indians are turned around sooner rather than later.