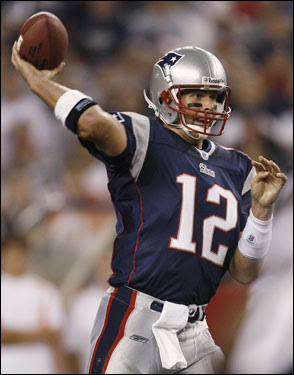 The New England Patriots just keep on rolling, and they took another opponent out to the woodshed, this time it was the Buffalo Bills. On Sunday night, they just beat them to a pulp, the final score being 56-10.

They are taking no prisoners right now, and are literally in a class by themselves. They are 10-0, and the 1972 Miami Dolphins players may not have any champagne celebration toasts this year.

The Pats, who look like they are doing football's 21st Century version of Sherman's March through Georgia, went up 35-7 at the half, and it was all over but what score the Patriots would end up winning by. They are just "embarrassingly great" right now, as Tom Brady threw five TDs in leading the rout. He now has 38 TD passes this year, and should break Peyton Manning's record of 49 easily.

This Patriots team reminds me so much of the 1998 Vikings, who set the NFL record with 556 points in a 16-game season. The Vikings were simply kicking everyone's ass that year. I remember a Sunday night game late that year they played against Jacksonville, who were a very good team and made the playoffs that season. They pummeled the Jags, 50-10, and like the Patriots, made it look incredibly easy. The Patriots are now averaging over 40 points a game, and are on a pace to pass the Vikings record by nearly 100 points. Scary.

And what do the 1998 Vikings and these Patriots have in common? Randy Moss. 1998 was Moss' rookie season. He's now caught an amazing 15 touchdowns this season, and should be a lock for Comeback Player of the Year.
Posted by The Omnipotent Q at 12:02 AM

The Moss connection is an excellent point. I really don't think people understand how good he is.