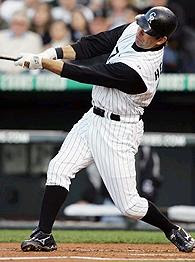 A few days ago, the rumors started kicking up again about a possible Todd Helton of the Colorado Rockies trade to the Red Sox. I wasn't terribly happy to hear about it.

Helton's a very good player, but at 33, appears to be on the downside of his career. He was one of the dominant players of the early 2000s, but his numbers, particularly last season, don't bode well.

He is still a terrific first baseman, but his power numbers have gone down the past two seasons. Helton hit 20 in 2005, and just 15 last season (and just 7 on the road). Back problems have slowed him, and the loss of power in a place like Colorado isn't a good omen, especially if he were to move to Fenway Park, which is murder on left-handed power hitters.

The deal that has been rumored has Helton coming to Boston in exchange for possibly a combination of Mike Lowell, Matt Clement, Julian Tavarez, and possibly a young arm such as Manny Delcarmen, Craig Hansen or Daniel Bard. The Rockies would eat about half of the $90 million owed to Helton over the next five years of his contract. Right now, the rumors are what's holding up this deal is that the Sox don't want to give up any one of those three young pitchers.

The Rockies desperately want to get out from under that contract, and have two good young infielders they want to bring up. The Red Sox would move Kevin Youkilis back to third and put Helton at first. Youk proved he could play the position last year, even if he did slow down late in the year at the plate.

Helton has a no-trade clause in his contract, and can veto the deal. He has said recently that he may be open to a possible trade to Boston.

The Red Sox would be adding a lot more payroll, and the offensive upgrade is minimal at best. Lowell gave them a solid year at the plate and especially in the field. I don't see Helton putting up significantly better numbers than Lowell did last season.

Dealing Tavarez and a young pitcher out of the pen would cut the Sox short out there, and you can never have enough quality pitching (see Bronson Arroyo). I really hope this deal doesn't happen. If they were making this trade four years ago, I'd be all for getting Todd Helton. But he isn't the same player he once was, and he won't be playing in Colorado any more. (Check the numbers on many players who've been traded away from Coors Field; they always go down significantly.)

The web site MLB Trade Rumors says that Colorado is the driving force behind any possible deal, and that the Sox have rejected all of their offers. I hope Theo Epstein and the front office continue to reject making this trade. I just don't think it would be worth it in the long run.
Posted by The Omnipotent Q at 1:22 PM