Former Sox On The Move 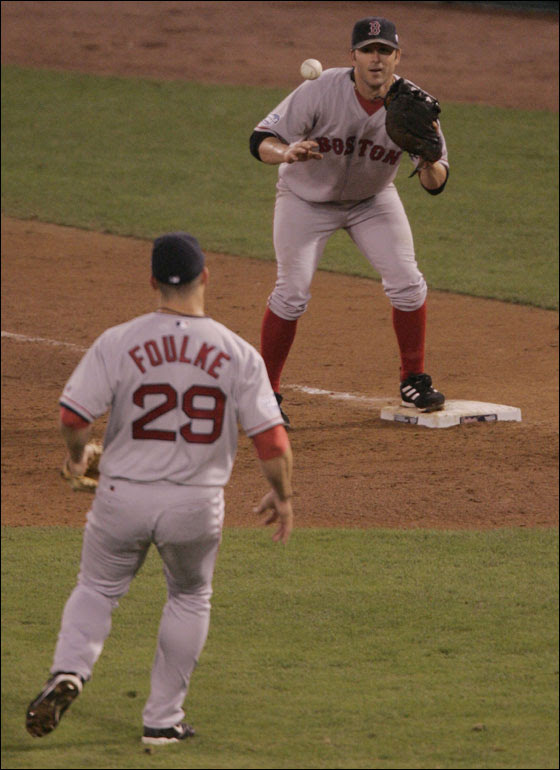 Foulke's deal is for $5 million and one year with an option. He may very well become a closer again, and the Indians will give him that opportunity. He has to prove to the Indians he's completely healthy from the injury woes that ruined his last two seasons.

Loretta's deal is also for one year, at $2.5 million, and some incentives could bring it to $3.5 million.

Mientkiewicz signed for $1.5 million, and figures to split time in New York at 1B with Andy Phillips. He's a fabulous first baseman, but he doesn't have a particularly good stick, and he's coming off back surgery from last summer. He's a no-brainer pick up for the Yankees, but he has to prove he's healthy as well.

I saw a terrific line at the Royal Rooters Message Board that I thought I'd share with you about yet another Red Sox player signing on with New York.

"At least he won't be stealing any more World Series balls."

The Red Sox meanwhile signed former Seattle pitcher Joel Pineiro to a one-year, $4 million deal. Pineiro hasn't put up good numbers the past three seasons as a starter, but I think he's worth taking a shot at. He can spot start, but he will be used mainly out of the bullpen. There are rumors the Red Sox may give him a shot to win the closer job in spring training if the Sox don't swing a deal for an established closer this winter. He could also win a job as a set-up man. It will be interesting to see if the change of scenery does him any good.
Posted by The Omnipotent Q at 12:16 AM

Minky will be a nice spot for pitchers to rest in the Yankees order. A Yankees fan was just telling me how the Yankees are becoming more and more like a National League team. Now they even have a weak 9 spot in the lineup.

I didn't think picking up Eyechart was a bad move for them. He'll give them very good defense, but with the Yankees lineup, they could afford to carry him in the nine hole. It remains to be seen if he has anything after his back surgery. And when was the last time you saw a regular first baseman batting ninth?

I think Doug M. was a nice pickup, throughout the Yanks teams, the Pinero signing wasn't bad, if he ends up being able to close, or be a long relief type guy, it's a great deal.

I agree with you, Furiousball. Pineiro can fill many needs, especially if someone goes down...

Eye chart AND the line about stealing WS balls? Too inspired...

Today seems to be the day to poke fun at the Yankees (ok, that is probably every day we can..:-)

I agree with you on the whole Piniero thing--we have to see what happens...different scenery, different role, hell, different pitching coach can sometimes turn someone comepletely around...

god oh mighty PINERIO reminds me too much of RUDY SEANEZ(god typing that name made me cringe).

We have to root for JP. He's got a new role for a new team for a huge amount of new fans...fans who are not shy to let him know exactly how they (we) feel!