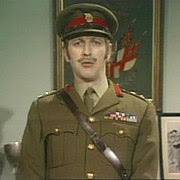 Today would have been the 66th birthday of the legendary Monty Python member Graham Chapman. He died October 5, 1989, at the young age of 48, from complications due to cancer (and on the day of Monty Python Flying Circus' 20th anniversary). Pictured on the right is one of his classic characters and one of my favorites, "The Colonel."

"I've noticed a tendency for this program to get rather silly...."

I've heard that there is a movie in the works about Graham's life, which includes his life as a gay man and his terrible battles with alcohol, that nearly ended his life even earlier than cancer did.

To me, he is one of the comic geniuses of all-time, and his writing partnership with John Cleese produced some of the funniest sketches in Monty Python. I hope that wherever he is, he's enjoying this birthday. We miss you, Graham. You left us way too early.

And, oh yes, it's also the birthday of a legendary musician who's no longer with us as well. Elvis Presley would have been 72 today, and I'm sure his fans are at Graceland in Memphis marking the day, as always.

Hey but us patriots fans loved the jets loss.

I do remember Chapman, who was a Medicinae Doctor(MD), in one "Python" Skit about a self help show on BBC, where his line was "Last Week, we showed you how to become a gynecologist":

I cannot remember laughing so hard, as "Monty Python's Flying Circus" was truly-noted for pushing the envelope;

My Blog Music has changed & has a "Latin" Beat. How "Gregorian" of me!

Wish Elvis Presley had been living today, he would have given a tough competition to the new generation musiscians. Happy Birthday to the rockstar. Peep into my blog for some unique birthday gift ideas.

Long live Jim Ed, on which I hope becomes HIS day!