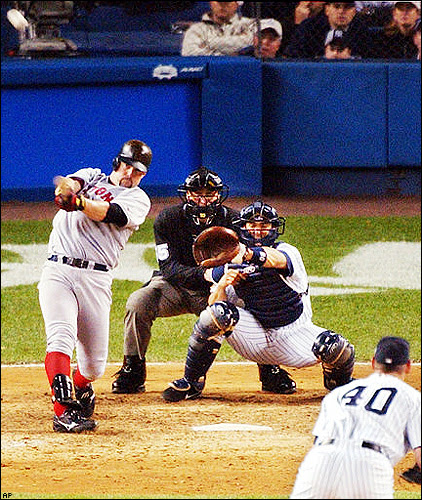 Another "One of the 25" has left the Red Sox, as Trot Nixon today agreed to a one-year, $3 million deal with the Cleveland Indians. It wasn't a shock that Trot was leaving, as his numbers had declined over the past few years due to the nagging injuries that seemed to plague his career.

When I think of Trot, I'll always think of those big time home runs he hit.

I will especially never forget two two-run homers he hit off Roger Clemens at Yankee Stadium. One was in 1999, in that immortal 2-0 Red Sox win on a Sunday night that Pedro Martinez went all the way in getting the win. He also hit one off Clemens in Game 7 of the 2003 ALCS that put the Red Sox ahead early in the game. (I'll never forget the raucous crowd in the Riviera chanting, "Jesus Loves You" right after he hit it.) He also hit the immortal home run to win Game 3 of the ALDS against Oakland at Fenway in extra innings in 2003 to put the Sox back into that series.

The first night I was ever in the Riviera Cafe was Game 6 of the ALCS in 2003, and I'll never forget the bar going absolutely bananas when Trot hit a two-run homer in the ninth to ice the victory, 9-6 (pictured above).

But I hope most Red Sox fans won't forget the great play he made in Game 5 of the 2004 ALCS. With the Yankees up 4-2 with the bases loaded in the seventh, Hideki Matsui hit a liner to right off Pedro Martinez that Trot made a great sliding catch on, to keep the game close (and we all know what happened after that). Had that ball gone past him, the Yankees win that series in 5 games. (Ironically, that was also the last play that Pedro Martinez was involved in a Red Sox uniform at Fenway.)

It was sad that Trot's career stalled the way it did, because I always appreciated his hard nose style. I wish him good luck in Cleveland.

I would have really liked the Red Sox to have shown a bit of loyalty and signed the guy. Perhaps he'll get more playing time in Cleveland.

With JD Drew coming on board one of these days, Trot's only option was to go elsewhere. His power numbers, as well as his overall numbers against lefties are pretty lousy, so a new start elsewhere might help him. The Indians will pltaoon him with Casey Blake in RF, so I hear...

And to echo a great line from the first INDY movie..."I'm ALREADY missing you! Thanks Q.