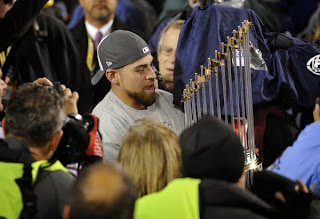 Jacoby Ellsbury sold himself to the highest bidder last night.

No big surprise, with him having Dr. Evil, aka Scott Boras, as an agent. My hat's off to Ben Cherington today for allowing another knucklehead to offer an odious contract to a Boras client.

I thought Ellsbury would end up in Seattle or Texas. Nope, it's New York. (Don't you love the fact that the Yankees go after Red Sox players with championship pedigrees?)

So much for the Yankees getting under the $189 million luxury tax for 2014. The contract they offered Ellsbury is for seven years, at $153 million. He would have been crazy to turn down this offer. The Red Sox clearly learned their lesson from the Carl Crawford disaster, and I'm really proud that the Sox brass walked away from Ellsbury, which they were clearly prepared to do.

New York signing Ellsbury means they forfeit either a first or second round pick in 2014, and the Red Sox gain a first rounder (and will gain another when Stephen Drew signs elsewhere). So tell me, which team needed to rebuild their farm system again?

Listen, I won't call Ellsbury a traitor or compare him to Johnny Damon. Ellsbury never said he wouldn't sign with New York (as Damon infamously did in May 2005). MLB players are first and foremost businessmen. It was a business decision. They are taking an enormous risk here, as Ellsbury has missed over 270 games the past four seasons due to various injuries (including 28 in 2013). This will be yet another odious contract the Red Sox wisely decided not to go near.

And for the Yankees, it was another case of having to make a big splash with their fan base. (My friend Lisa Swan, who I have a lot of respect for, is not happy about this. She has a good take on it today over at her site "Subway Squawkers.") They clearly have gotten far away from what made them winners in the late 1990s, and throwing insane money at guys like Ellsbury won't fix that.

This does remind me a bit of when the Yankees traded for Alex Rodriguez in 2004, and I wrote to my Red Sox fans who were upset about it: "Alex Rodriguez can't pitch."

Jacoby Ellsbury can't pitch either. Even if they resign Robinson Cano (for even more they signed Ellsbury to, yet more insanity), it doesn't address their pitching problems. For the sake of their payroll, they better pray A-Rod sits out all of 2014.

The Red Sox move on. It could be Matt Kemp, Carlos Beltran, Curtis Granderson or Jackie Bradley playing center next year. We'll see where the Sox move on to.

Right now, I can only say thank you to Ellsbury for being a big part of two World Series championship teams. See you at Fenway next April 22.

And thank you to Jarrod Saltalamacchia, who officially joined the Miami Marlins on a three-year deal last night. Thanks for being part of a memorable 2013 championship season.
Posted by The Omnipotent Q at 10:41 AM