Irish Take The Pinstripes In The Bronx 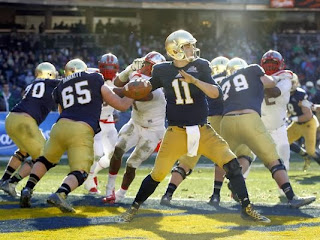 Notre Dame ended the 2012 season with a 26-16 win over Rutgers on Saturday in the Pinstripe Bowl at that den of vipers called Yankee Stadium.

It completed a not bad year for Notre Dame, who went 9-4 on the campaign, after losing three of their biggest defensive players to the NFL and two others on D to injury. (10 of their opponents are playing in bowl games this year, so a return to the BCS title game didn't look very viable.)

Tommy Rees completed his Irish career in style, going 27-for-47 and 319 yards. I'm betting this his last football game, as he doesn't appear to be NFL material. But you never can tell.

All-time Notre Dame is 17-6-3 in edifices known as Yankee Stadium, and the second win in two tries in the new joint.

Notre Dame plays their next game in just over eight months, as they open the 2014 season at Notre Dame Stadium against Rice on August 30th.
Posted by The Omnipotent Q at 6:58 PM