OK, I Was Wrong On Cano 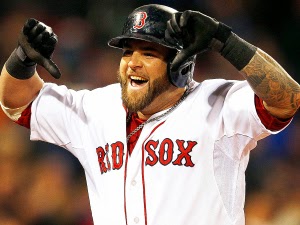 It's been one helluva crazy week on the Hot Stove front.

Jacoby Ellsbury and Jarrod Saltalamacchia both leave the Red Sox for the greener pastures of New York and Miami respectively (that's a joke, folks). Mike Napoli will be returning to the Sox for two more years at $32 million. (And if you look at the original deal he signed last year for three years that the Red Sox changed to one year, Napoli has actually come out ahead on the deal by about $7 million.) Stephen Drew is still available to anyone, but it looks like he will leave for a multi-year deal elsewhere.

And in the shocker of the week, Robinson Cano bolted the Yankees yesterday for the Seattle Mariners, for a ten-year deal worth $240 million. The Yankees called his bluff, and Cano left. New York answered it back by signing an aging Carlos Beltran to a three-year, $45 million deal. They are about 9 years too late on Beltran. (After the 2004 season, Beltran practically begged the Yankees for a deal for less money he got with the Mets, and they passed.)

It was further a bad day for the Yankees, as Curtis Granderson left for the Mets, for a four-year deal. Good move by the Mets, as they have to show their fans that they are indeed on the way back.

Plain and simple, the Yankees blew it on Cano. Granted, the Mariners needed to make a big splash and become relevant again, and in the long run the Yankees may have made the right move. But this clearly hurts them in the short run. They replace his bat with Beltran, who will be 37 next season. This team needed to get younger, and move athletic, but they settle for an aging slugger whose best days are behind him and his defense wasn't what it was. They are clearly going in the wrong direction, and now they will have to move Brett Gardner to get some pitching help in a trade.

They are throwing crazy money around now, and it's like putting Band-Aids on a gaping wound. They have gotten far away from the formula that brought them success in the late 1990s. They should have taken a step back and rebuilt their farm system and gotten younger. But it's their money, and they lost bucks by not making the playoffs in 2013.

I have to admit that I am enjoying seeing Yankee fans act like the crazy sterotypical Red Sox fans who lose their minds when a star leaves and goes elsewhere, especially to New York.

I'll leave you with this question to ponder:

Would you rather have Ellsbury go to Seattle and Cano stay in New York, or let it be the way it panned out, with Ellsbury in New York and Cano in Seattle? Granted seeing Ellsbury in pinstripes won't make any Red Sox fan happy, but it just may have worked out for the best. We'll see.
Posted by The Omnipotent Q at 12:10 PM