No AP Or Toby? No Problem. Enter Matt Asiata. 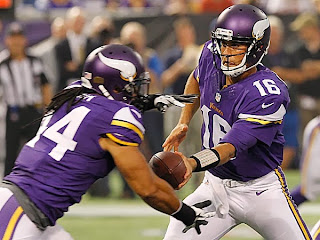 When the news broke yesterday morning that both Adrian Peterson and Toby Gerhart was sitting for Sunday's game against the Eagles at the Metrodome, I thought we might be in for a really ugly afternoon under the white roof.

I couldn't have been more wrong. No AP? No Gerhart? No problem. AP had an ankle injury, and Toby had a hamstring injury from last week's loss in Baltimore, and both were forced to sit it out.

Matt Asiata, a second year player from Utah who has been used basically as a blocking fullback and on special teams (and wears Chuck Foreman's old number: 44), got the starting assignment at running back and made the most of his big chance.

He rushed for 51 yards on 30 carries, but scored three TDs in the Vikings surprising 48-30 upset of the first-place Philadelphia Eagles. Asiata became the first NFL player to score three TDs in his first NFL start since Daunte Culpepper did it for the Vikings in his debut in 2000.

It was a huge day for Matt Cassel, who put up the best numbers of any QB in a game this season. He threw for 382 yards and 2 TDs and ran for another. Cassel isn't the Vikings long term answer, but it is clear they are better off sticking with him, and not Christian Ponder.

The 48 points was the most the Vikings have scored in a game since their record-setting team of 1998 scored 50 late in that year.

I give the Vikings a lot of credit in that they are playing hard for Leslie Frazier and are not mailing in the rest of this season. The defense played well, and shut down LeSean McCoy, the NFL's leading rusher, as he only got 38 yards on the ground.

A lot to like about yesterday, and made me wonder what could have been. Three of those last-minute losses could have been wins, and they would be right in thick of the playoff race. The Vikings are now 4-9-1, and are 3-2-1 since the loss in Dallas on November 3. They play the Bengals in Cincinnati next Sunday, and conclude 2013 with the Metrodome finale against Detroit on December 29.
Posted by The Omnipotent Q at 11:14 AM