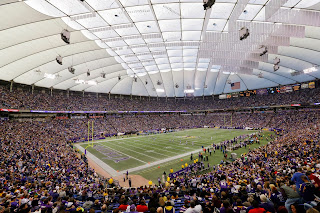 The Vikings bid farewell to the Metrodome yesterday with a 14-13 win over the Detroit Lions.

The Dome will be taken apart starting next month, and the new stadium will begin construction on the same site. (As much as people would like to have seen it blown up, that won't be happening.)

The Vikings played there from 1982 until yesterday. The Dome had hosted the World Series, Super Bowl, the Final Four, and numerous concerts. The Vikings were there for 32 seasons, and never went to the Super Bowl in the entire time they called the place home. (It has now been 37 seasons since the Vikings appeared in the big game, in January 1977 against Oakland.)

So I guess it is time for them to return to their roots: the outdoors. They will play the next two seasons in the University of Minnesota's home stadium, before their new home opens for the 2016 season.

I was in the Metrodome just twice: both in August 1999, for a Vikings preseason game against the Eagles, and a Twins-Red Sox game the day before. (Vikings won, 17-13, and the Twins won, 5-3.) I actually enjoyed the time I spent in the building, as it was not the dungeon it's been made out to be. It clearly isn't a classic ballpark by any means, but the noise the Vikings fans made during the football game was pretty infectious.

The Vikings conclude their final indoors with a 5-10-1 record, and it officially cost Leslie Frazier his job as head coach. He was let go today, and it comes as no surprise. The Vikings gave up the most points of any NFL team, and have a muddled QB situation. I really thought this would be a promising season, but it wound up being yet another season to forget. The Vikings had a decent second half, going 4-3-1 after the dreadful 1-7 start.

Time to start anew in 2014. A new temporary home with a brand new coach.
Posted by The Omnipotent Q at 11:32 AM