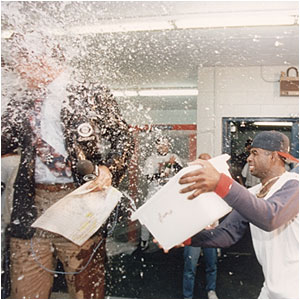 I had mixed reactions yesterday when the word came down that Tim McCarver announced his retirement from Fox after broadcasting games there since 1996. He will announce the 2013 season and then step away.

He should have retired years ago, as his mistakes and malaprops made during games in recent years made watching games almost unlistenable. I rarely watch games on Saturdays when he's involved.

McCarver had become a lightning rod for fans in recent years, and the hatred spewed towards him on Internet is legendary.

But I will admit that I was a McCarver fan right after he landed in the Mets broadcast booth in 1983, after doing Phillies games for three years. I actually enjoyed his take on baseball, as he brought a different perspective than I was used to. I liked how blunt he could be, and even pissed off many Mets players. He also made many other ballplayers angry, too. (Remember when Deion Sanders dumped ice water on him after the 1992 NLCS? See photo to refresh your memory.) McCarver was part of a three-man TV team with Ralph Kiner and Steve Zabriskie. (Remember him, Mets fans?) That was actually a good trio to watch baseball with.

McCarver eventually wore out his welcome with Mets management in 1996, and moved over to call Yankees games until 1999. It's there his legendary fascination with Derek Jeter began.

I must admit there are a few moments from the 2004 postseason that McCarver (who many thought was a Yankee homer) was involved with that will always stay with me, and they are actually some pretty good lines.

"Curt Schilling's performance tonight will long live in New England baseball lore."--Said by McCarver as Curt Schilling was leaving the mound at the end of his performance in Game 6 of the 2004 ALCS, the famous "Bloody Sock" game

"The Red Sox are doing everything right. The Cardinals are doing nothing."--Said by McCarver right after Trot Nixon's bases loaded double to give the Sox a 3-0 lead in Game 4 of the 2004 World Series

And that's about all I can complement Timmy on. Glad to see him ride off into the sunset finally. Too bad he can't take Joe Buck with him as well.
Posted by The Omnipotent Q at 12:27 PM