I have a number of books to read this past winter and spring, but one I needed to read before the 2013 baseball season kicks off is "Francona: The Red Sox Years." 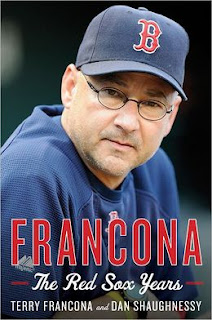 I got an autographed copy back in January when Terry Francona did a book signing in Manhattan. I sat down and finally read it as spring training was winding down.

Francona put the book together with the writer you love to hate, Dan Shaughnessy. I'll always give CHB his due in that he does have the gift of writing and telling a compelling story. (It's what and how he writes things that's drawn so much hate towards him, but that's a story for another time.) It is NOT Francona telling his story as a narrative, but it is really CHB's book, so please keep that in mind when reading it.

The book is about Tito's life in baseball, but of course, the centerpiece is his tenure as Red Sox manager. Francona is clearly a baseball lifer and loves nothing more than putting on a baseball uniform. It's an interesting read, with a depressing ending, of course. This won't go down as one of the great baseball tomes of all-time (somewhere David Halberstam has nothing to fear), but for Red Sox fans, it is a glimpse into the inner workings of what will go down as a golden age in the team's history.

But as someone who has followed the Red Sox closely for the last 35 years, I can't say there was anything shocking in the book. You'll find what you would expect: Manny Ramirez was a pain in the ass, Pedro Martinez was a high maintenance character, Nomar Garciaparra couldn't wait to get out of Boston after he wasn't traded before the 2004 season started, and that the 2011 Red Sox were a pack of entitled prima donnas who cared more about their stats than looking after each other's backs.

The book is really Francona getting a number of issues off his chest that have clearly bothered him. His relationship with the Red Sox ownership of John Henry, Tom Werner and Larry Lucchino was never warm and fuzzy, and he needed to get his version of the way it ended for him after the 2011 disaster out. It's clearly important to him to know who ratted him out to Bob Hohler of the Boston Globe when he wrote the article about the collapse in October 2011, about his alleged abuse of painkillers,which Tito strongly denies. (And to this day, the guilty party or parties still remain unknown).

I still came away from reading the book with the theory I had after Tito resigned (or was fired, take your pick): that he was clearly burned out from his eight years managing in Boston. He won't put it in those exact terms (and I didn't expect him to) but he needed to get away, if only for his own physical and mental well-being. It's no great shock to me that his tenure as Sox manager is now second longest in team history, to Joe Cronin. Boston is clearly a manager-killer baseball town, and probably always will be.

I found it very curious in the acknowledgements that Francona thanks just about everyone who has been special in his baseball life, but thanks the "Boston Red Sox" and doesn't name any of the individual owners. (It's clear that it will take many years for the pain of 2011 to finally abate for him.)

Like I said, there's not a lot to surprise the average Red Sox fan who follows the Sox closely. Once again, keep reminding yourself that CHB wrote this book. It is clearly written through his prism.
Posted by The Omnipotent Q at 12:04 PM