That Wraps Up Another Football Season. Thankfully. 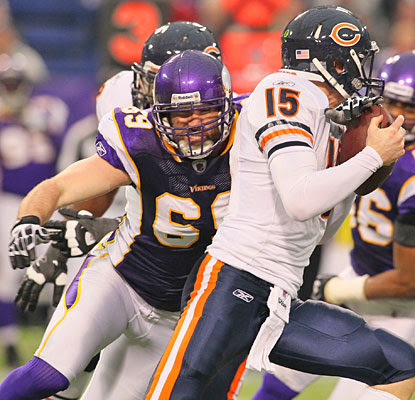 Yesterday's 17-13 loss to the Bears at the Metrodome means they end this awful campaign with a 1-7 record at home. They beat Arizona back in October for their only home win.

They were also swept in their division, at 0-6, for the first time in club history.

Only bright spot of the finale was Jared Allen, the Vikings' Pro Bowl representative, got 3 sacks to lead the league, and missed Michael Strahan's record of 22 1/2 by just a half, as Allen finished with 22.

The Vikings will get the number three pick in the NFL draft in April, after Indianapolis and St. Louis. And now the real fun begins as to whether the Vikings get a new stadium in Minnesota, or will be calling another locale home next fall. They can legally leave Minnesota as of February 1st.

Let's hope the deal for a new home gets done.

Now bring on the baseball season.
Posted by The Omnipotent Q at 11:23 AM