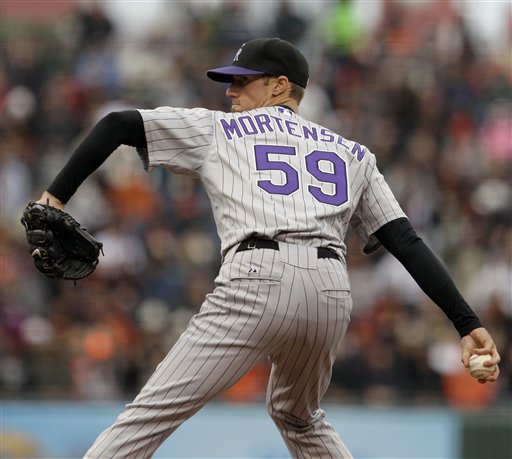 So much for the Red Sox not going after Roy Oswalt.

The Sox traded Marco Scutaro to the Colorado Rockies for a marginal RHP named Clayton Mortensen. The trade was made for one simple reason: the Red Sox wanted to free up some money to make an "aggressive" bid for Roy Oswalt. (Doesn't this sound like the operations of a small market club?)

There was a rumor that Scutaro was heading to Colorado yesterday, but that was quickly shot down. Another day, another rumor, and this time it's true.

Scutaro was the Red Sox best hitter in September's disaster of a month, hitting .397 while the club went belly up. They also traded away the other regular shortstop in 2011 when Jed Lowrie went in the Mark Melancon deal. It looks like they will go with a tandem of Nick Punto and Mike Aviles at SS until Jose Iglesias is ready, and you figure that won't happen until 2013. (Punto played just a handful of games there last year and Aviles hasn't played SS in three years.)

I have a feeling the Red Sox aren't done as far as the shortstop situation is concerned. They maybe looking to make a deal for another SS. (And I don't mean Hanley Ramirez. He would cost way too much, and he's a dog I wouldn't want on my team anyway.)

The Red Sox also avoided arbitration with Daniel Bard and signed him to a one-year deal worth $1.625 million.
Posted by The Omnipotent Q at 7:38 PM