Clutch Carl To The Rescue Again 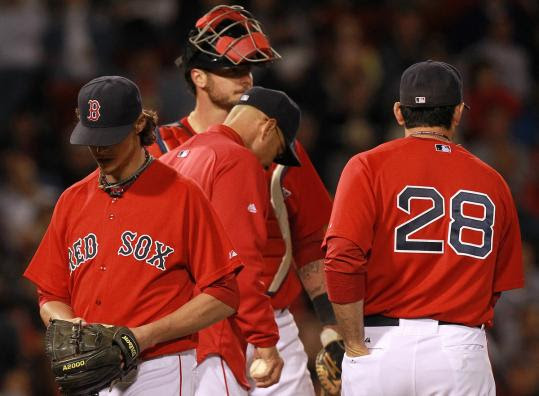 This night sure didn't start off good.

I was making my way back from another of my acting gigs when I checked my cell on the subway and saw the score of the Red Sox game after one inning was 4-2 Oakland. I thought that Clay Buchholz' back problems must be more severe than we know.

Buchholz allowed six runs in 4+ innings, and when I saw Bobby Jenks in the game with the A's up 6-5 in the seventh, I thought the A's would be adding to their lead for certain.

But with first and third and one out, he got a double play to end the inning. And the Sox loaded the bases with one out in the bottom of the inning. Jed Lowrie popped up, and I thought we'd see yet another squandered opportunity. But Carl Crawford muscled a single to center to score two and give the Red Sox the lead back. (BTW, Allan at Joy of Sox has an article about the opportunities the Red Sox have wasted this season. They lead the league in "squanders.")

Jarrod Saltalamacchia hit a long home run in the eighth, and Jonathan Papelbon got his 11th save and the Red Sox ended the four-game losing streak, 8-6.

New York's loss to the Angels means the Red Sox are 1 game back in the AL East.

BTW, today's game is at 1 PM, as the Red Sox moved it from 7 PM so Sox/Bruins fans could watch Game 2 of the Stanley Cup Finals tonight. But I just checked and today's game is NOT listed on the MLB package. I won't be a happy camper if this is true.
Posted by The Omnipotent Q at 11:36 AM