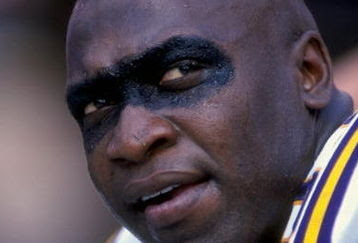 Congratulations to former Vikings defensive tackle John Randle, as he was one of seven men elected to the Pro Football of Fame today.

Randle joins Emmitt Smith, Jerry Rice, Dick LeBeau, Rickey Jackson, Russ Grimm and Floyd Little as those who will be enshrined in Canton this coming August.

Randle had a stellar career with the Vikings, as he was a 7-time Pro Bowler and a 6-time All-Pro. He played with the Vikings from 1990-2000, and finished his career in Seattle. He also holds the all-time NFL record for sacks by a defensive tackle with 137.5.

I'll never forget him as the guy who always wore the purple eye black on his face during games, and for his chatting with the opposition and officials during games.

Welcome to Canton, #93. I'll be pulling out my John Randle jersey for tomorrow's game.

But curiously, Cris Carter was passed on for the third consecutive year. He certainly is worthy in my opinion, as he is third on the all-time list in receptions (1,101) and fourth all-time in receiving TDs (130). Hopefully next year will be Cris' time.
Posted by The Omnipotent Q at 5:43 PM

Dick LeBeau finally made it. 14 years as a player and 36 as a coach. He invented The Zone Blitz and in his early 70s still as spry as ever.

A few years ago, Coach LeBeau pulled aside his Steelers starting secondary aside at Training Camp and asked the four men how many career interceptions they had. As a Group, they totaled 12.