The Best Show on TV. I'm Proud to Be Part of It. 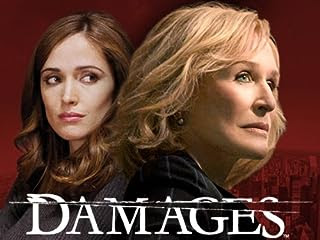 My job as a background actor led me to a shoot of the TV show "Damages" yesterday. This was the third time I've done the show this season. (And it is one hell of a great show. Check it out if you haven't. Trust me on this.)

I did the second shoot a couple of weeks ago. And it was in the same studio, and the same set I did the first one at in September. In fact, I was reprising my role as a "Ponzi scheme victim" and a representative of a group of victims who was taken in one of those things. And again, I was with Glenn Close and Tate Donovan.

It was another memorable day. As soon as I sat down at the very same conference table we filmed at five months earlier, Ms. Close looked at me and smiled and said, "You're the trivia guy." I smiled back and said that I was. I chatted with her and she asked me how the trivia was going. (I didn't mention anything about Professor Thom's temporary closing.)

I can't tell you how cool it was that she remembered me. I pulled out my new business card, one I had made last December, and gave it to her. Glenn was impressed by the words "Trivia Maven" on it. (She's a big trivia fan, and she told me she'd love to come out to my Trivia Night some time.)

In between takes, the crew had to move the cameras to a different position, so we all had to go off the set. Ms. Close came up to me and asked me, "Have you ever been on Jeopardy?" I told her I hadn't, but told her of my ill-fated appearance on "Who Wants to Be a Millionaire." She asked me how much money I won, and I told her I blew the fifth question and went home empty handed. "Was it a question you should have known?" she asked me. I had to be honest and I said yes, but I also told her about the enormous pressure of sitting in The Hot Seat. (I didn't volunteer what the question was and she didn't ask me.)

I was on and around the set for about six hours that day, filming a scene where all the Ponzi scheme victim reps have it out with Patty Hewes. (Watch the show to see what happens.) But it was another memorable day in my career as a background actor, and Glenn Close once again keeps the title of The Coolest Celebrity I've Ever Met.

Yesterday was a completely different thing. This time it was an exterior shoot, at a bar on West 108th Street in Manhattan. Glenn Close wasn't there, but Tate Donovan and Rose Byrne were. My role was just as one of those folks walking by the bar as the characters talk inside the place. I had to report early in the morning(at 8 AM), and I only did the one scene, which concluded at about 11:30. There was a steady drizzle to deal with, but it actually went rather smoothly.

But in the morning when I was reporting to the background PAs, I said my name was John Quinn. And to my surprise, a gentleman in his early 60s was standing next to me and said, "You're John Quinn?" I said I was, and he said "I'm John Quinn, too." We both couldn't help but laugh at that. He was a nice gentleman, also a background actor who I chatted with briefly.

Yep, I acted with another John Quinn yesterday.

John Quinns are everywhere. According to the web site HowManyofMe.com, there are 1401 people named John Quinn in the United States. Even Facebook has a group called People Named John Quinn, which has nearly 100 members, of which I am a proud member.

That was some coincidence yesterday. "Damages" never ceases to be a great experience for me.
Posted by The Omnipotent Q at 12:29 PM

Congrats - hope the snow did not effect anything today:
http://en.wikipedia.org/wiki/John_Quinn

Hey Q. I think there are far less guys with the name Peter Naboicheck than JQ, don't you? I will check out the show, that's for sure.

I have one question...have you appeared on MILLIONAIRE yet? Let me know with a comment and I'll check tomorrow, if not before. Take care.

Peter: yes, I appeared on "Who Wants to Be a Millionaire" back on December 18th, and if you go back to my blog around that time, you can see an article I wrote about it. Sorry you missed it. I honestly have never watched it, although I taped it. One day I will get the courage to watch it.

This is a fascinating post all around, Q. I must have missed the post about you appearing on Millionaire. Congrats, even though it appears you didn't gain much monetarily. I'll backtrack now and look up that post.

This is like the coolest moment of my life, and it didn't happen to me, it happened to you!

Fatal Attraction has been on a lot lately, so I just keep imaging the Close of '87 saying to you in her Fatal Attraction voice, "are you the trivia guy?" Can you tell us when your Damaged episode(s) will be airing?

Also, I missed the Millionaire post too! And I come here almost every day! Going to go read it now....

Thanks for sharing such a great story. Glenn Close recently appeared on "Jeopardy" (giving clues in a category entitled, "Damages") but I'm afraid I missed it. That would have been fun to see.