Irish Trivia on a Special Night 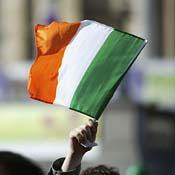 As most of you hopefully know by now, we are not having Trivia Night this Tuesday night, as it will be St. Patrick's Day, and it will simply be impossible to have Trivia Night there with a bar full of revelers, many of whom would be yelling out answers.

So last Tuesday, we had a vote as to which night the regulars would like to have it this week, and Monday won handily. So on March 16th at 9 PM, we will have a special edition of Trivia Night. We will return to our usual Tuesday night on March 24th.

The special category will be "Irish Trivia." Big shock, eh? It will be seven questions associated with the Emerald Isle, and they will also be of the multiple choice variety. The Q Train lightning round will be something new, and I am calling it "1-2-3-4 Trivia." I will give you ten questions and each answer will be one of those four numbers.

The Sneak Peek question for this week is:
"In what century did Ireland's Potato Famine take place in?"

I hope many of you can turn out for the special edition of Trivia on Monday night. Erin Go Bragh!
Posted by The Omnipotent Q at 12:20 PM