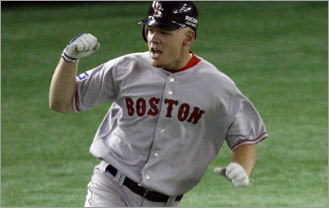 It was early morning baseball for Red Sox fans all over the US, and especially at Professor Thom's pub, where I was taking in the Red Sox game, on the earliest Opening Day in MLB history. And, as usual, the media found me.

I was in the bar no more than 30 seconds at the ungodly time of 5:40 AM when I took off my coat and a reporter from WINS radio here in New York came up to me with a microphone and started asking me questions. He asked me where I was from, and I said I was from Brooklyn, born and raised. He was shocked that someone like me, a New Yorker, could be a Red Sox fan. I told him about my parents and their lifelong hatred of the Yankees, and how I became a fan of the Sox 31 years ago. A story I have now told people at least a hundred times at Thom's.

I was also interviewed by a guy from WCBS-AM radio in NYC, and he asked me more questions about the Red Sox chances. One of my friends heard me on the radio and sent out an email saying he heard just heard "Mr. Media Whore" (me) on the radio.

They just find me. Don't ask me to explain it.

The bar had a great crowd for a 6 AM start. About 100 fans in all turned out, and witnessed a great game. (We were fortunate to have ESPNHD at the bar, as DirecTV suffered a blackout during the game and many Sox fans were left out in the cold. We couldn't see the game on NESN as it was blacked out here, and was probably only seen in New England.) Daisuke Matsuzaka, the conquering hero, returned to a thunderous ovation at the Tokyo Dome but was really shaky in the first two innings. He gave up two runs, including a home run to Mark Ellis in the first. A lot of it was probably jitters, but he did a lot of nibbling, walking 5 while striking out 6. Dice-K did settle down to allow just the two in five innings, and it sure could have been a lot more.

The Sox finally got it going in the sixth, as Manny Ramirez doubled in two and scored on a single by Jason Varitek. But as soon as I saw Kyle Snyder come in, I knew the lead would disappear. And it did, on a two-run shot by Jack Hannahan. It looked like a 4-3 loss was going to happen, until Brandon Moss (pictured) hit a one-out home run, his first MLB blast, off Huston Street, to send the game to the tenth. (In Maine, my friend Ennis must have been going crazy, as he is Moss' biggest fan.)

In the tenth, Manny hit a blast off the wall in right center to drive in two runs and put the Sox up. (But I wish he would stop that admiring crap he does in the batter's box, as he had to hustle just to get to second.) Jonathan Papelbon, who was an automatic last year, struggled in the tenth. He was helped out by Emil Brown's running goof, as he tried to stretch a double into a triple and was thrown out. With the score 6-5 and two outs, Pap gave up two more singles before he got Kurt Suzuki to ground out to end it, and get the Red Sox off to a good start to 2008.

I was hoping the Red Sox would at least split the two games in Tokyo, and now can do no worse than that. One of my friends may have summed the morning up best by saying at the finish, "The Yankees are now in second place."

Let's hope they stay there.
Posted by The Omnipotent Q at 12:51 PM

The Media Machine "not so evil" Empire continues to expand!