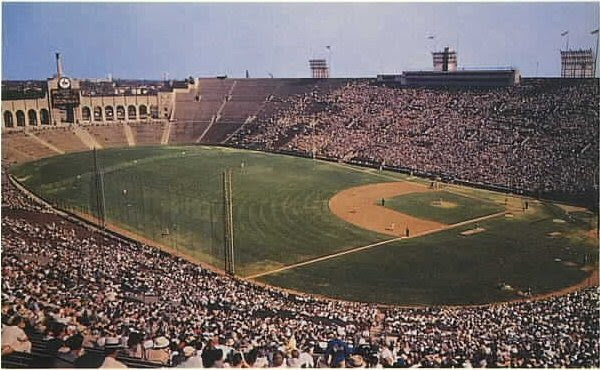 The Red Sox are playing an exhibition game against the Los Angeles Dodgers on Saturday night, March 29 to mark the 50th anniversary of the Dodgers move to the city. (It's part of a three-game series they'll be playing in L.A. before starting the regular season in Oakland.) That contest is also being played in the cavernous Los Angeles Coliseum, where the USC Trojans play and the Dodgers played from 1958-1961.

But on that night, the largest crowd to ever witness a baseball game anywhere is expected: an incredible 115,000 fans.

Over 90,000 tickets have already been sold, and about 25,000 standing room tickets will be sold. It will easily break the old record of 93,103 for a 1959 exhibition fundraising game at the Coliseum for Roy Campanella between the Dodgers and Yankees.

As I was thinking that of that new record crowd, I would bet that anywhere from 40,000 to 50,000 of those fans might easily be Red Sox fans. Red Sox Nation has an enormous following in California (yes, Hank, we really do!) and when the Sox play the Angels in Anaheim there is always a large throng of Red Sox fans. When I was in San Diego last June for the three-game series, at least 40% of all the fans over the weekend were Red Sox supporters, many of whom were transplanted New Englanders.

And if as large as 40,000-50,000 Red Sox fans are in attendance that night, it would be the largest number of Red Sox fans ever gathered to see them play a game. (Fenway only holds just over 38,000, although the record crowd for a Red Sox game at Fenway Park is allegedly over 47,000 for a game against the Yankees in 1934. I can't see how that was possible.)

And ironically, it wouldn't be in Boston, it would be as a road team, in Los Angeles.

Incredible.
Posted by The Omnipotent Q at 12:06 PM

Nice shot of the old LA Coliseum.
Some friends got me a great coffe table book entitled "Ballparks" last year. It's nothing but shot after shot of every current ML park and shots of most of the old ones as well. I love seeing the old parks from the 20s and 30s, but nothing beats Fenway. The only thing close is Wrigley.
I'm glad they get to be a part of history, but here's hoping that the Red Sox never play in a 50,000 seat home stadium.
By the way, where is your bar? My son has been in NY several times working lately and expects to be there some during the season. I'll suggest he come by for a Sox fix.

I also have the "Ballparks" book, Sosock. It is terrific. Great shots of old parks that are just a memory.

Professor Thom's is on 2nd Avenue and E. 13th Street in the Village. The Red Sox ALWAYS get priority on the TV screens, and there's always fans there for every game. I'm sure your son will enjoy it. (And I host Trivia on Tuesday nights!)

"before starting the regular season in Oakland."

After those Japan games.

About the Fenway attendance record, it was before fire codes, and all those extra people were out on the warning track along the outfield fence (or even closer). It was before "Williamsburg," so there was a lot of room out there.

I guess I should have said starting the regular season "in the US," oops....I could never figure how they could have gotten as many as 15,000 extra fans into Fenway in 1934. I do remember it was Babe Ruth's last game as a Yankee in Boston. Thanks for letting me know, Jere...

Leave it to Jere to find the incredible photo of the event in question. What a find!
Good work - as usual Jere

& those Dodger Fans are NOT the Loud Baseball fans, there Brooklyn Predecessors were.