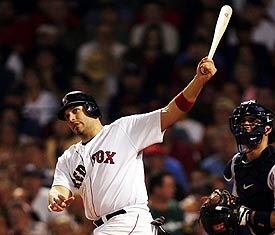 
The Sox are releasing Doug Mirabelli. They have Kevin Cash, George Kottaras and Dusty Brown as backstops. Cash has caught the knuckler before in the minors, and last season when Mirabelli got hurt in August. But it will be interesting to see who the main backup to Jason Varitek (and more importantly, Tim Wakefield's catcher) will be.
Mirabelli just didn't have the stick to warrant being the Sox backup catcher any more. And on this, the second anniversary of this site, the man who was an Internet cult hero and the most popular post we've ever put up (the laugh-out-loud fictional day in his life) will no longer be a Red Sox player. Every time Doug played, the hits on this site would go up, and if he did anything special like hit a home run (a rare thing but it happened), the numbers would literally skyrocket.

We salute Dougie by putting up the link to "A Day in the Life of Doug Mirabelli" one last time.
Enjoy: http://quinnmedia.blogspot.com/2006/07/day-in-life-of-doug-mirabelli.html

Thanks for the Site Meter numbers Doug. We appreciate it. And good luck to you.
Posted by The Omnipotent Q at 1:02 PM

Thank you for the most pathetic, homophobic, offensive, awful rant in history.

Thank you, Steel. Glad you enjoyed it...BTW, next stop for Dougie: Washington?

doubt it. 30-something knuckeball catchers with limp noodle bats have a limited shelf life.

Lo Duca will start for now-Estrada is the ultimate empty .290 hitter and backup.

Jesus Flores will be in AA somewhere and, all things willing, the starter in 2009 or 2010.

Doug can go on some ESPN show or something.

NESN can hire that folk hero.