Some People Just Don't Get It 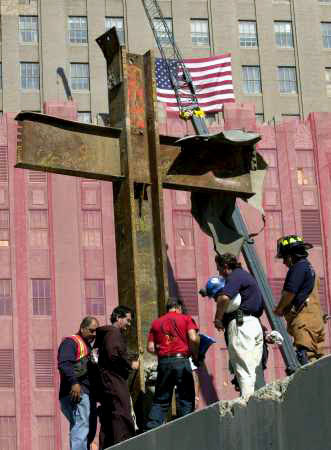 This morning I picked up the New York Daily News and I found myself reading their "Voice of the People" column. It has always been an 'entertaining" read over the years. I am convinced that some of the dumbest people in the United States write letters to the New York Daily News. Some of them have been real beauties, and I've written responses to them over the years (and the News has printed a few of them).

Today I read a letter from some guy in Manhattan named Steven Davies, who wrote a scathing letter in response to The Cross at Ground Zero being part of the World Trade Center Memorial. (And I wrote a response back to the Daily News about it. I'll let you know if they print it.) Before I give you my response to his letter, I'll let all of you read it:

How dare they put a Christian religious symbol in the WTC memorial? The victims hailed from almost all the world's religions. If they include a cross, they should include symbols for Jews and Hindus and Muslims and Sikhs. They should even include a bowl of marijuana for Rastafarians. What was the miracle this cross represented, anyway? It was one of hundreds of crossbeams used to build the towers. After it "miraculously" appeared, were people suddenly rescued from the rubble? Was Osama suddenly caught? It has been there for more than four years; have the toxins disappeared from the Deutsche Bank? The people who venerate the cross as a miracle are weak-minded, and the people who acquiesced to religious threats and pressure are even weaker. Steven Davies

This letter is beyond ridiculous, from somebody who clearly doesn't "get it." Finding a steel beam in the shape of a crucifix at 6 World Trade Center on September 14, 2001 has nothing to do with favoring one religion over another. In the midst of the worst catastrophe in American history, an incredible symbol of hope was discovered. If the rescue workers had found any symbols that were distinctly say, Jewish or Muslim, they too should have been preserved as well, and been part of the permanent memorial. But they didn't. Finding those steel beams in the shape of a cross absolutely transcends and goes beyond religion.

The letter just reeks of someone so consumed by that dreaded disease: political correctness. And Davies sounds like one of those people who finds any religion incredibly offensive. The Cross is like the phoenix rising from the ashes, and that shortly after the worst day in our history, a little shining glimmer, some light at the end of the tunnel was discovered.

No, Davies, we haven't found that murdering bastard Bin Laden, and no, we unfortunately didn't discover anyone else alive after we found The Cross. But I deeply resent you calling people like me "weak-minded" for thinking we found a miracle the day we made the discovery of The Cross.

You have a problem with that, Davies?

Too bad. Go find another PC cause to rant to the New York Daily News about.