I Love These Nights 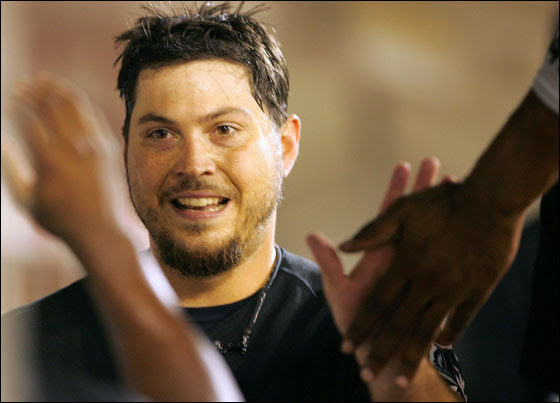 It was a dream evening.

Randy Johnson had nothing, could barely find home plate, was gone by the fourth inning, and was roundly booed by the Yankee fans as he departed. He'll be 43 in September, but he's pitching like he's turning 63.

Josh Beckett (pictured) gave up two early runs, then settled in and retired the next 12 batters before departing in the seventh with an eight-run lead. It was a big time performance by Beckett, who returned to the site of his greatest triumph, the 2003 Game 6 World Series win over the Yankees for the Florida Marlins that got him the MVP award for that series.

Alex Rodriguez, who was voted the 2005 AL MVP and is allegedly one of the best third baseman in the league, made two critical errors that cost him team four runs. He also hit into a double play and went o-for-4. Mr. Clutch strikes again.

2005's REAL MVP, David Ortiz, broke out of his slump with a big double and scored two runs. Once again the Yankee pitchers tried to be too careful with him, not taking the advice of a moronic New York scribe to "Drop Papi!"

Manny Ramirez and Alex Gonzalez both hit long home runs. Gonzo had a big night, with 2 hits, 2 walks and three runs scored. Mike Lowell continues to crank out the doubles, as he had two more to up his AL lead with 19. Mark Loretta continued his hitting recent surge, adding three hits.

Professor Thom's was crowded and rocking all night long, and when E-Rod made his two errors, the bar sang out with the derisive chant, "MVP!" "MVP!" During the game there was also a camera crew from NESN and the Red Sox, filming the bar and the fans enjoying the game. The bar's rep continues to grow.

The Red Sox thoroughly humiliated the Yankees, 14-3, on their own home turf in the Bronx.
Rarely do nights get better than this.
I need more of them in my life.
Posted by The Omnipotent Q at 12:23 PM

We even managed to get a halfway decent chant of LET'S GO RED SOX going at the Stadium towards the end. Let's hope the big fella can get his game on tonight.

I was in Section 22, this evening & it started out a bit promising as Papi ripped one long for 2 runs, but Schill didn't have & just what was Nipper Watching?