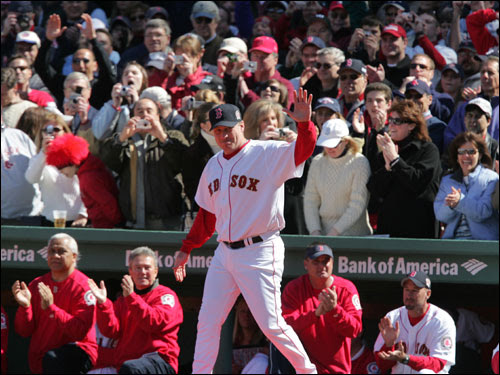 Curt Schilling won his career 200th game tonight as the Red Sox beat the Devil Rays, 6-4 at Fenway Park. I only caught the last inning of the game, as I was out having dinner with a friend tonight. Curt gave up 4 earned runs and 8 hits in seven innings of work.

Terry Francona sat Manny Ramirez tonight because of back stiffness, and he put Kevin Youkilis in left. It was Youk's first career game in the outfield. Wily Mo Pena also sat because of the soreness in his wrist, so Willie Harris played center.

Youk had two hits and two walks, and Mark Loretta continued his torrent hitting, going three-for-five and Trot Nixon had 3 RBI. But the star of the night was Schilling, who became the 104th pitcher in major league history to win 200 games. He also became the fourth pitcher to win his 200th game in a Sox uniform, joining Lefty Grove, Ferguson Jenkins and Luis Tiant. Curt was called out by the fans after the game for a standing ovation. He also revealed that his son Gehrig asked him to get it for him tonight, as it was his 11th birthday.

As "Nation Watched Around The World", whether in England, or Kazakhstan or in Professor Thom's, 't'was a night to remember.

But, in some papers, the talk is of electing "Mr 2K Hits", a Tim McCarver Favourite as MVP.