The Fourth In My Lifetime 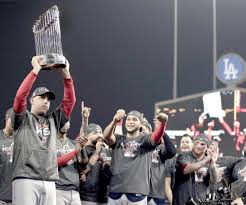 I never, ever thought I'd write the title of this post.

The 2018 Red Sox staked a claim as one of baseball history's greatest teams with a five-game World Series steamrolling of the Los Angeles Dodgers, 5-1 on Sunday night.

It was an amazing October. They beat the other two teams that won 100 or more games in the American League this season, and many oddsmakers had the Sox as underdogs in both series. (Really?)  It was simply a joy to see the Sox dispatch the Yankees in four games (their destruction and humiliation in Game 3 was particularly satisfying), and then taking out the Dodgers (who will always be called traitors in my home borough of Brooklyn) as easily as they did.

Steve Pearce, the journeyman infielder who was picked up from Toronto with little fanfare back in June, was voted as World Series MVP for his three clutch home runs he hit in the final two games. (He joins Donn Clendenon from the 1969 Mets as the only two MVPs who played for two different teams in the same season.) David Price was simply magnificent in the World Series, winning his two starts and becoming the first Sox pitcher since Luis Tiant to win three consecutive postseason starts. (I particularly enjoyed his session with the media after the World Series win, basically telling them all to shove it up their collective asses. Good for you, David.)

It was a World Series when the big Red Sox stars didn't have big numbers. Mookie Betts hit .217 with just a Game 5 HR; Xander Bogaerts hit .136; Jackie Bradley his .231; J.D. Martinez had just the one HR in Game 5. The team hit a collective .222 for the Series (and of course that was mostly due to the lack of hitting in the 18-inning Game 3 and the first six innings of Game 4).

The story of the Series is the Red Sox pitching, as the Dodgers hit a meager .180 in the Series. Price was the king of the hill, with a 1.98 ERA and 10 Ks. Joe Kelly was simply magnificent, as he pitched in every game, and in six innings did not allow a run, allowing just 4 hits and striking out 10. But the performance that will go down in Red Sox lore will be that of Nathan Eovaldi. After two superb innings in the first two games, he came into Game 3 in the 12th inning, and should have been the winning pitcher after two innings (Ian Kinsler is hereby forgiven), but wound up going 6 magnificent frames, until giving up Max Muncy's game-winning home run in the 18th. He was so appreciated that the players and staff gave him a standing ovation in the clubhouse after the loss. That speaks volumes, and when I heard that story, I knew the Sox were winning this series.

And win it they did. A magnificent comeback in Game 4 from 4-0 down, and Steve Pearce's first inning statement home run in Game 5 meant the Sox were on their way. Chris Sale sure wasn't fooling around, as he struck out the side in the ninth (how brilliant was it that Manny Machado was the last out) to give the Red Sox their fourth title in 15 years, and the ninth in their glorious history. Alex Cora, who pushed all the right buttons in this Series, became the third Red Sox manager of the last four to win the World Series in his first year as Sox skipper. (I can't remember the name of the guy who didn't win.)

For me personally, I can barely put it into words what it means to me to see the Red Sox win a fourth championship in this century. I became a Red Sox fan in 1977, and for years it was rammed into our collective heads but various media dingbats (I don't have to name them, you know who they are) that as Red Sox fans, we were living under some moronic "curse" and that we'd never see our team win a championship. As a fan, I just want to see our team competitive and in the running to win a title, and they have done that year in and year out since John Henry and Tom Werner took the reigns of the club in 2001. As Red Sox fans, we are one of the few fan bases that can say we've seen our team win it now four times in our collective memories. And I don't take that for granted, and I don't expect the Red Sox to win it all every year. I will enjoy and savor this victory over this winter, and for the rest of my life.

119 wins for 2018. The Red Sox made history in 2018, and I thank them all from the bottom of my heart for giving us all such a grand and glorious year.

Now if only the Minnesota Vikings can win me a Super Bowl before I die...
Posted by The Omnipotent Q at 12:59 PM