Eddie Dominguez was a distinguished member of the Boston Police Department for many years, before he left to join a newly-former group of four investigators who would look over Major League Baseball in the wake of the congressional hearings in 2005 about steroids and other performance-enhancing drugs in the game. And that's the basis of Dominguez' new book "Baseball Cop: The Dark Side of America's National Pastime." (Hachette Books, written with Teri Thompson and Christian Red.) 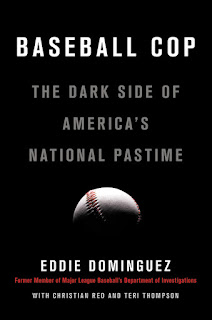 The DOI (Department of Investigations) would investigate all facets of MLB's dark underbelly: gambling, cover-ups, human trafficking and lot more besides PED users. Dominguez was a decorated detective in the Boston PD, as well as a member of an FBI task force. He is also an immigrant from Cuba, as well as a longtime Red Sox fan, with a stellar record and very well respected in the law enforcement community.

Dominguez had worked for the Sox from 1999-2005 as a resident security agent. And in the book, Dominguez says that a close friend of David Ortiz, a man he calls "Monga", a frequent visitor in the Red Sox clubhouse, placed bets on baseball and against the Red Sox. Dominguez and his team thought the situation so serious that a meeting was called in the Red Sox clubhouse involving Ortiz, Terry Francona and the chief of MLB security. Monga was banned from the Red Sox clubhouse. (Ortiz denied he ever had Monga place bets for him, although Dominguez makes no direct allegations about it to Big Papi.)

Dominguez writes about the agents who rip off young Cuban players with dreams of playing in MLB, but the meat of "Baseball Cop" is the "Biogenesis" scandal that rocked the game. Commissioner Rob Manfred was intent on "getting" Alex Rodriguez. He eventually got a 162-game suspension after an original 211-game ban. Dominguez lays out the entire scandal, from small "fishes" like Felix Pie (who escaped punishment), to Ryan Braun (whose 65-game ban was ridiculously light in his opinion).

The main take away from "Baseball Cop" is that MLB still has some serious drug problems among the players, and that the mandates from George Mitchell's controversial report of 2007 have basically been totally ignored. The players are still cheating, it's just they are finding new ways to get around the drug tests. The book is a compelling read, and will explode any myths that the "Steroid Era" is long past us.
Posted by The Omnipotent Q at 12:10 PM