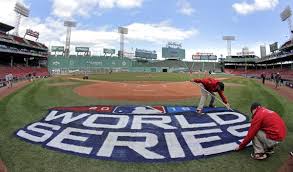 Before the Year of Our Lord 2004, it was drummed into all of our heads that the Boston Red Sox were under some kind of "curse", and we would never see them win a World Series, and all they would do is break our hearts, time and time again.

The media made up some nonsense called "the Curse of the Bambino" and that we as Red Sox would live our lives rooting for a team that would never win it all. (I won't bore you with all the reasons it was all BS, as that's not the point of what I'm writing about.)

Tonight, the Red Sox go for their fourth championship in 15 years, as they take on the Los Angeles Dodgers at Fenway Park.

It's truly a Golden Age to be a Red Sox fan. I take none of this for granted. I am one of those rare baseball fans who can they have seen their team win the World Series three times, and it could be an even rarer one who can say they have seen four titles. I am enjoying this great postseason ride they are on, and that's what I want as a baseball fan, to see a competitive team year in and year out. Some years we win, some we don't.

It seems like a lifetime ago that the Sox lost the World Series back in 1986. It was the most heartbreaking of ways to lose, and it stuck with me for years, as I would have the occasional dream that Game 6 was replayed and the Red Sox would win. But I always knew I'd see the Red Sox win it all in my lifetime. And 2004 will forever remain the greatest season in Red Sox history for many fans. They made history in the ALCS, that may never be duplicated. (Consider that since that great comeback, only one team has come from 0-3 down in a seven game series and even won Game 4. And that is the Cubs in 2017, before losing Game 5 to LA.) And who they stuck the choker tag on 2004 (no names, you know who they are) will make it the sweetest part of all.

The Red Sox have a terrific, mostly young team, that has solid pitching, great hitting, very good defense, and enough team speed to dominate the American League and win 108 games. It was simply a dream year, where the Yankees were hardly any factor at all (they briefly were in first place in early July, but the Sox passed them shortly afterwards and left them in the dust). Alex Cora has proved himself to be a terrific manager, as he seems to push the right buttons at the right time. He hasn't been without criticism (remember when he'd give some of the big bats a day to rest when it seemed like they were most needed in the lineup?) but he has a plan and stuck with it.

I am as excited as any other Red Sox fan to see my team back in the World Series for the first time in five years. It's where we want to be at this team every October. But it won't happen every October, so savor and enjoy this series everyone. This series doesn't have the overall excitement and anticipation of 2004, but no World Series the Sox have been in since has that. But I will be watching the games with friends who've been fans of the team as long as I have been, remembering those good times we shared in other postseasons.

I'll root, root, root for the home team tonight, and hope to see them lifting up the championship trophy sometime next week. It would be the fourth time in my lifetime if it happens. And I'll will never stop be grateful that I witnessed it once in my lifetime.

The Sox in six. Let the games begin.
Posted by The Omnipotent Q at 11:54 AM