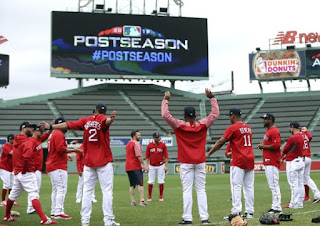 I haven't written much about the Red Sox here, as I've dedicated my blog mostly to my Trivia Night. But for Sox followers, it was a season to savor: a third consecutive AL Eastern Division title, a team record 108 wins, and a an ALDS date with the archrivals.

I'll be honest: I was hoping the Red Sox would play the Oakland A's in the first round. The first obvious reason is that the Sox would have been heavy favorites over Oakland. But I really never wanted to see the Sox play New York again in the postseason, and for 14 years, it didn't happen. The 2003 and 2004 postseason clashes literally took years off my life, and I don't think I could deal with that again.

All I can say before this latest War to End All Wars starts is that the team that pitches better will win it. The Sox pitchers have to keep the Yankees in the ballpark. We all know that New York set a new MLB record for home runs in a season, but you can put that off to the side as the postseason begins. They've got firepower for sure. And it's up to Chris Sale to come off his long rehab and set the tone for this series tonight. The Red Sox twice put him on the DL this summer, and the conspiracy theorists believe they did it just because of Sale's lousy September and October in 2017. I doubt there's any truth to that, as Sale is a fierce competitor as there is. He wouldn't have been shut down if he didn't want to do it.

And then there's David Price. He's pitched well at Fenway in his career against the Yankees, but this is the postseason, and he's struggled mightily come October. The pressure will squarely be on his shoulders, and that will go double should the Red Sox drop Game 1.

Rick Porcello is scheduled to pitch Game 3 at Yankee Stadium on Monday night, and Nate Eovaldi, who has been great against New York in his two starts against them this year, would go if there's a need for a Game 4 on Tuesday. (I won't go position-by-position here, as you can find that in your local newspaper, which is obviously hyping this series to moon.)

This is one of those series the Sox may have to play almost perfect ball to win. They need to score early, and the bullpen, which has scared even the toughest of fans this season, must be solid. The real key to this series is on how far the starters can go in each start, and if Alex Cora needs to go to the pen early, the Sox could be in some deep trouble.

There's no question that all the pressure in this series is on the Red Sox. Two consecutive first-round bomb outs the last two years led to the hiring of Alex Cora, and he has done a superb job in his first year at the Red Sox helm. The 108 wins goes into the bank, but it is now a new season. I won't make any predictions in this series, as almost anything can happen in a short series. I'm optimistic this could be the beginnings of a great postseason, but we will see.
Posted by The Omnipotent Q at 12:13 PM