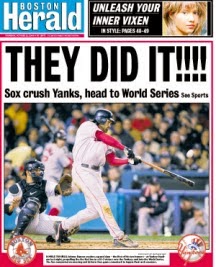 It was Game 7 of the 2004 ALCS between the Red Sox and Yankees. The Sox had been down 0-3 in the series, and had won the last three game in a row to make history, as not team had ever played in a postseason Game 7 after losing the first three games. My friend Adam predicted an 11-0 Sox win after they won Game 6.

He wasn't too far off.

It was a night for the ages. The Sox scored early and often, and had an 8-1 lead by the 7th inning. Johnny Damon blasted two home runs, Derek Lowe was spectacular. Even bringing in Pedro Martinez in the 7th inning (why Tito?) couldn't spoil it, and made the pathetic Yankee fans look even more pathetic with the chants at him. Mark Bellhorn's 8th inning home run shot down any comeback attempt, and sent the "loyal" Yankee fans to the exits. 10-3, Red Sox.

I was at the Riviera Cafe in the West Village with about 150 other Sox fans, and partied into the night with my friends in seeing the Myth of Yankee Superiority exploded forever that night.

The World Series was a forgone conclusion, but we'll talk more about that next week. My friend Allan at The Joy of Sox has an excellent retrospective of the 2004 ALCS up on his site. Worth reliving it, especially with all the great newspaper covers from Boston and New York he's put up.

But of course, "Four Days In October" is a great documentary to relive this 10th anniversary, especially since me and my friends are in it, starting at the 33:00 mark (I'm the guy wearing the Sox jersey sitting at the bar).