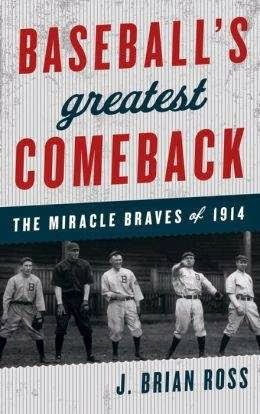 As we all know, America loves an underdog. There have been many in baseball history, and most think of the 1969 New York Mets as the gold standard for it. And there have been many amazing comebacks as well, with the most famous being the New York Giants coming back to win the National League pennant in 1951 (who coincidentally, pulled it off 63 years ago today).

But there was a forerunner for both underdog and comebacks in MLB history. It was the 1914 Boston Braves, who pulled off the most amazing comeback in baseball history, and it is chronicled in the new tome, "Baseball's Greatest Comeback: The Miracle Braves of 1914" by J. Brian Ross.

The Braves were a pretty nondescript team, playing second fiddle in the city of Boston to the Red Sox, who had won the World Series in 1912. The Braves had not won a pennant in their history and had finished fifth of eight teams in 1913, after ending up in the basement the previous four seasons. They broke from the gate in 1914 losing 16 of their first 19 games, and it looked like another last place finish was in store for them.

On July 4th, they dropped a doubleheader (you remember them, right?) to the Brooklyn Dodgers, and they stood at 26-40 in last place. A few days later they played an exhibition game against Buffalo of the International League, and were humiliated, 10-2. It was the naadir of a lost season. But right after that, their fortunes turned. And dramatically.

Ross does a nice job setting up the times the Braves won it all in 1914: it was the Progressive Era, which was marked by invention and innovation. But it was also a dangerous time, as war was looming in Europe, and would engulf the world.

Ross also talks extensively about many of the major stars of the era, like John McGraw, Christy Mathewson and Connie Mack. He also focuses on the only stars playing for the Braves, future Hall of Fame infielders Rabbit Maranville and Johnny Evers. The section on Evers is especially interesting, as he went through a few tragedies during his playing days. The Braves also had a colorful manager named George Stallings, a figure really lost to MLB history, and Ross' depiction of him is as a real character.

A combination of amazing pitching, great defense and timely hitting put the Braves on an amazing run, as they won 68 and lost just 19 the remainder of the season. They took over first place on September 8th, as the mighty New York Giants slumped in August, and the Braves won the league by an astounding 10 1/2 games, as they went 26-5 in September.

The Braves met Connie Mack and the mighty Philadelphia A's in the World Series. They were one of history's greatest teams, winning three of the past four World Series. Ross does well here describing each of the World Series games, which was a Braves sweep. (The Braves played their two home games at Fenway Park, as Fenway had a larger capacity than Braves Field.)

If I do some criticisms of the book, is that it is a bit short (only 153 pages), and there was little followup on the aftermath of the Braves' miracle season. (It turned out to be just a one-year wonder, as the Braves finished second in 1915, and wound up back in the second division by 1917. The A's suffered a worse fate, as Connie Mack began breaking up his championship squad, as he was short of money. They finished 43-109 in 1915. So the 2014 Red Sox aren't the first team to win a title and finish last the next year.)

But it overall an enjoyable read, and the parallels to the 1969 New York Mets are quite evident. J. Brian Ross brought a deadball era champion back to life, and despite some faults, it is well-worth your time to check it out, especially if you are a fan of old time baseball history.
Posted by The Omnipotent Q at 12:04 PM