"The Kid: The Immortal Life of Ted Williams" 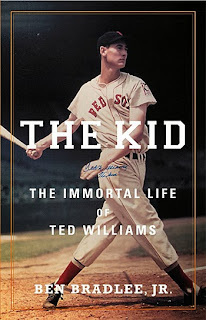 On New Year's Eve, I completed reading one of the bigger books I have ever read, the new biography of Ted Williams called "The Kid: The Immortal Life of Ted Williams."

It was written by Ben Bradlee Jr., who spent ten years researching the life of the great Hall of Famer, and absolutely left no stone unturned in this exhaustive biography, and it runs nearly 800 pages.

The book opens with the death of Ted, and his body shipped off to be frozen at Alcor in Arizona, which is ghoulish to say the least.

Every phase of the Splendid Splinter's life is examined, beginning with his birth in San Diego and his difficult upbringing by an uncaring father and a mother who was more concerned about saving souls with the Salvation Army. The book also examines in depth his Mexican roots, and Ted's fears about it being uncovered during his playing days.

He was definitely a lonely kid, and you seem to get idea he was most happy when he was alone. Baseball became his life as a youngster, and it was all-consuming passion. He was brash, and not afraid to let everyone know how great he was going to be. Cocky and arrogant, and it served him well in many respects of his life, but not in others.

His relationship with women was always volatile. He went through three marriages, and had numerous affairs in and after his playing days. He had three children, and had a difficult relationship with all of them, especially his son John-Henry.

Ted's five years in the military is especially fascinating. I never knew how upset he was about going back into the service again during the Korean War, and how behind the scenes he tried to get out of it, while publicly saying he was fine going back in.

The book gives the highlights and lowlights of Ted's career. The highs being 1941 when he hit .406, his home run in the All-Star Game that year, and one of his most proudest accomplishments: hitting .388 and winning the AL batting title in 1957 (which in many ways was a bigger thing than what he did in 1941, as Williams was 39 and at the end of the line). The lows being the loss to the Cardinals in 1946 World Series when he hit just .200, the playoff loss to the Indians in 1948 and the two losses to New York in 1949 that cost the Red Sox the AL pennant.

The book is chockful of tidbits I never knew about Ted's baseball career (like Ted being offered the Red Sox managerial job in 1954, the Tigers job in 1961, and the Yankees wanting to sign him as a pinch-hitter in 1961).

Ted's post-MLB career is looked at in incredible depth, from his becoming a Hall of Fame fisherman, to his return as Washington Senators manager, to his ultimately being looked after by his son John-Henry in his later years. John-Henry doesn't come off well in this book, and is made out to be a son who was looking to make every last buck out of his father's name. That may ultimately have led him to cryonics, where  a person can be frozen after death in the hope of one day being "revived." I found all of that to be rather unsettling, and brought back bad memories of when Ted and his name became a joke on late night television.

I definitely recommend the book, as it is the last word on one of MLB's greatest heroes. Ted Williams was complicated individual, and Ben Bradlee Jr. brings him back to life. The book is enthralling, and worth the time to read, even if you aren't a Red Sox fan.
Posted by The Omnipotent Q at 8:11 PM

I do want to read this one. I was in the minority of people who didn't really think much of the Leigh Montville book. I guess you know you're a baseball fan when you never tire of hearing the old stories.