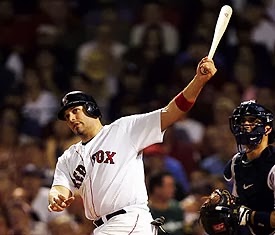 I noticed in the last few months of 2013 that the traffic to the blog here had dipped rather low, as I hadn't been writing that much.

But on the website Reddit.com, there was a thread about the Blue Jays pitcher R.A. Dickey earlier this week, and a fan brought up Doug Mirabelli, Tim Wakefield's old personal catcher with the Red Sox. And of course, he linked the "A Day In The Life Of Doug Mirabelli," which originally put up here in 2006.

And the traffic here just exploded. (BTW, I don't use SiteMeter any more, as they now give you almost no information that they used to. Anyone know what happened to them? I now use Clicky.) I had nearly 1,400 hits here on Friday, which is by far and away the most ever in the nearly eight year history of this blog.

It's Dougie to the rescue once again! (Remember when the Red Sox brought him back in 2006, and got him to Fenway in the police car?) Every time someone discovers my post on the Internet and puts it on a site, my numbers skyrocket, and I appreciate that. The Dougie post is by far the most popular thing I have ever posted on my site.

For those of you who have haven't read it, or just want a good laugh, just go here.
Posted by The Omnipotent Q at 11:55 AM