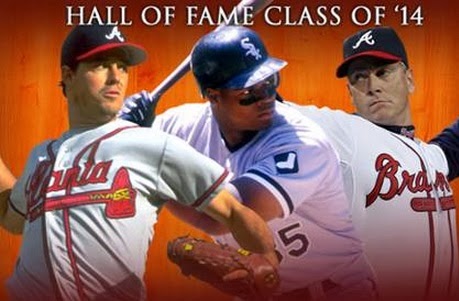 It was no surprise that three deserving MLB players were elected to the Hall of Fame yesterday: Greg Maddux, Tom Glavine and Frank Thomas.

All three were first-time candidates, and each made it easily. Maddux received the most votes, 97.2% of all votes, or 555. 16 writers did not vote for him. Lord knows why.

Craig Biggio missed election by just two votes, as he got 74.8%. That bodes well for him, as he should make it in next year. Mike Piazza finished fifth with 62.2%, and that was increase over his 2013 tally. I'm betting he's elected in the next couple of years.

Jack Morris failed in his 15th and final try at election, and his numbers actually dropped from last year. He was the most "hot button" candidate in this year's election, and will now have to wait until 2016 to be considered by the Veterans Committee.

Here is the complete list of the vote, courtesy of Baseball Reference.

And as I thought would happen, both Barry Bonds and Roger Clemens saw their numbers drop over the first-year tallies. No big surprise with the crowded field of quality candidates. The two combined did not add up to the 75% needed for election. It's clear that neither of them will be elected any time soon.

As far as the other "Steroid All-Stars" on the ballot, Mark McGwire and Sammy Sosa's numbers continue to plummet, with McGwire down to 11% and Sosa at 7.2%. They will never, ever be enshrined.

And it officially ended for Rafael Palmeiro, as he got under the 5% cutoff with 4.4%. Palmeiro disappeared after he failed the drug test in 2005, and continues to be even further off the radar now.

The numbers went down considerably for Curt Schilling, Edgar Martinez, and Tim Raines. There will be a very strong first time class in 2015, which includes Pedro Martinez, Randy Johnson, John Smoltz and Gary Sheffield. It's going to be a long road for guys like Schilling, Martinez and Raines, who I believe all deserve to be enshrined one day.

With the field being as crowded as it is for the next few years, I really thinking the Hall of Fame ballot should be expanded from voting for 10, to at least 12 or 15. Some want to make it unlimited, but I don't think they have to go that far.

Congratulations to Greg Maddux, Tom Glavine and Frank Thomas, and they will be officially enshrined at Cooperstown on July 27th with managers Bobby Cox, Tony LaRussa and Joe Torre.
Posted by The Omnipotent Q at 11:20 AM