Slappy Sits For One Year 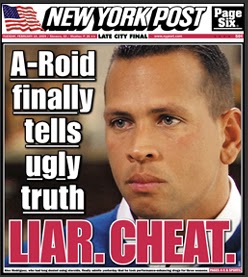 As the whole baseball world knows, Alex Rodriguez will now sit out the entire 2014 season for his role in the Biogenesis scandal. The suspension was lowered by 49 games by arbitrator Fredric Horowitz, from the original 211 games.

A lot of Red Sox fans were jumping for joy that A-Rod will sit out this entire upcoming season. Not me.

No, I haven't become an A-Rod fan. But I was hoping that he would be suspended for 50 or 100 games, as that would hurt the Yankees far more than a full year suspension would. Slappy's over the hill, and I would much rather see him clogging up a roster spot than sit all of 2014.

New York will save about $25 million now that Slappy will miss 2014. A shorter suspension would have put them on the hook for his 2014 salary, and further hamstrung their ability to add other players. They are still on the hook for the last three years of his deal, worth about $61 million. And you know A-Rod won't walk away from that money and retire. He will try to make it back in 2015, but honestly, how much could he have left after missing most of the previous two years, with two bad hips and being nearly 40 years old?

A-Rod and his handlers are threatening a Federal injunction to block this suspension, but don't bet on that happening. US courts rarely ever overturn these kind of suspensions that have been reached through collective bargaining. And besides, he would have testify in open court about his steroid past. If he gets caught committing perjury, he could face jail time.

BTW, A-Rod is still still eligible to participate at Spring Training beginning next month, and then will have to sit out the entire year. Can you imagine what kind of a circus that will be? Unless both parties come to some kind of an agreement beforehand, the Yankees can't legally bar him from coming, so be prepared for much more A-Rod nonsense when their players report to Tampa in February.
Posted by The Omnipotent Q at 12:00 PM