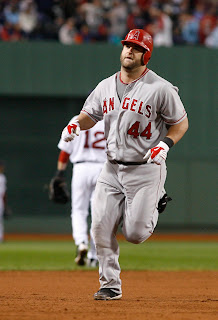 The Red Sox and catcher/first baseman Mike Napoli have reached an agreement on a three-year, $39 million deal.

Not a big surprise, as Napoli appeared to be high on the Red Sox radar.

Napoli's numbers at Fenway as opposing player are impressive: 19-for-62, with 7 home runs in 74 plate appearances.

I bet Napoli plays most of the time at first, but will probably also see a good number of games behind the plate. This move also virtually assures the Sox will move one of their catchers in a deal, most likely Jarrod Saltalamacchia.

Solid move. Cherington is picking and choosing players to fit into a team concept. I doubt that any flashy moves will be made. Napoli and Gomes look like guys whose swings are built for Fenway.

I guess that mean that Adam LaRoche to Boston is unlikely.

No question about it, Steel. I like the moves so far. Ben is definitely bringing in guys who will change the culture of the clubhouse. I'm betting LaRoche stays in Washington.