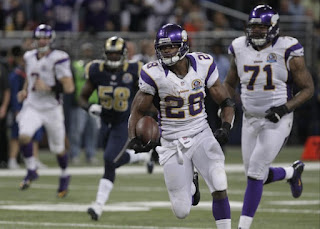 If I were Eric Dickerson, I'd be rather worried tonight.

Adrian Peterson had yet another historic day in St. Louis on Sunday, running for 212 yards in leading the surging Vikings to a 36-22 win over the St. Louis Rams.

AP did it on 24 carries, and scored the second Vikings TD on an 82-yard run from scrimmage. He also had a 52-yard run, that led to the last of Blair Walsh's five field goals, and locked up the win.

The Vikings scored their first TD on a 5-yard run by Christian Ponder. Ponder had a better game than he had in last week's win over Chicago, going 17-for-24 for 131 yards, and did not throw any interceptions.

The game was all Vikings from start to finish. They had a 30-7 halftime lead. The Rams scored two fourth quarter TDs to make it a 33-22 score, but Peterson's second long run late in the 4th put it on ice.

It was also another big day for Walsh, who hit three of his five FG from 50 yards or better.

The Vikings are now 8-6, and are tied with Chicago for second in the NFC North. They are also tied with Dallas and the New York Giants for the final wild card slot.

The Vikings take on the Texans in Houston next Sunday. Houston wrapped the AFC South with a win earlier today, so it won't be an important game for them.

But now the big focus will be on Peterson's quest to break Eric Dickerson's 1984 rushing record of 2,105 yards he set in 1984 with the Los Angeles Rams. AP now needs 293 yards in the final two games to reach the record, as he now has 1,812 yards to lead the NFL.

AP is a tank right now. I wouldn't bet against him reaching the record. Don't bet Eric Dickerson isn't a tad bit concerned tonight.
Posted by The Omnipotent Q at 10:09 PM