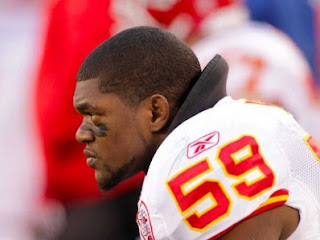 As you all know, Kansas City Chiefs linebacker Jovan Belcher committed two absolutely horrific acts of violence last Saturday: after an argument with his girlfriend and mother of his child, Kasandra Perkins, he shot her to death in their apartment, and then drove to the Chiefs practice facility at Arrowhead Stadium and killed himself in front of three team officials.

The murder-suicide was the topic of Bob Costas' halftime talk during Sunday night's game on NBC, and it has garnered all kinds of publicity, and a lot of it negative.

Costas, who I have a lot of respect for, talked about "changing the gun culture" and quoted Kansas City Star columnist Jason Whitlock, who believes that both Belcher and his girlfriend would "still be alive" if Belcher did not have a gun.

Costas does commentaries at halftime every week during the Sunday night game, and this was obviously on the minds of everyone who is a football fan. So I certainly respect his right to give his opinion on that subject. I think those who suggest he be fired by NBC for doing it are being silly (and are just angry because they disagree from where he's coming from).

However, I couldn't disagree with him and Whitlock more about how both Belcher and Perkins would both be alive if Belcher didn't own a gun. You can't know that for sure. Obviously, the argument so enraged Belcher (it is rumored to be over his seeing another woman), that he was capable of murder. If he had no firearm, he could have killed Perkins with a baseball bat, a golf club, a knife from a kitchen drawer, throwing her through or out a window, or even with his own fists, as he was a 6'4" NFL linebacker. Too many women in America have been victims of domestic violence, and many have been killed by other means than by guns.

And about the gun culture, unfortunately America and guns have gone together long before the United States even became a nation. It is estimated that there are as many guns here in America as people. The Second Amendment riles up people on both sides of the issue, and always will. I have never owned a gun, or even fired one on a target range. I'm not a big believer in guns.

Different states have different laws about guns. New York has some of the toughest laws in the US. But in many states getting a gun can be as easy as buying a loaf of bread. Outright banning guns is no solution, as it will be like Prohibition in the 1920s. Instead of alcohol, it will be firearms, and people will get a hold of them even if they are illegal. It would just be something organized crime can exploit. And it certainly wouldn't take away guns from the bad guys.

A solution to the "gun problem?" I can't give you that. It is so complex, and guns, whether legal or illegal, will always be a part of us. Belcher's gun was legally purchased, and he had no history of domestic violence or run-ins with the police. So there was nothing to suggest that Belcher was a ticking time-bomb of some kind. What set him off? We may never know. Did the violence of pro football affect him in some way? Could it have been a case of "roid rage?" Again, I can't answer that.

All I know is that a three-month old girl lost both her mother and father in two senseless acts of violence.

And there's only ONE person to blame in this whole tragic circumstance: Jovan Belcher. And him alone.

I have no problem with Bob Costas discussing the matter on national TV last Sunday, albeit very briefly. I certainly wouldn't expect him to have any answers to what happened in Kansas City on Saturday morning. It's a terrible tragedy that happened, but it is one in a long list of tragedies that have happened in this country involving guns.

And unfortunately, it won't be the last.
Posted by The Omnipotent Q at 12:54 PM