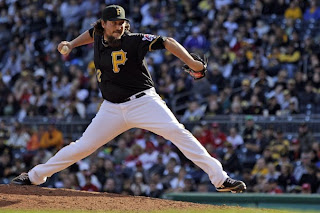 The Red Sox completed the Joel Hanrahan deal with the Pirates yesterday, and acquired minor league second baseman Brock Holt in the trade. They sent reliever Mark Melancon, who was a disaster in 2011, along with minor league pitcher Stolmy Pimental, and two of the players they acquired in last August Dodgers megadeal, Jerry Sands and Ivan DeJesus, to Pittsburgh.

The Red Sox also announced that Hanrahan will be the Red Sox closer for 2013, and that Andrew Bailey will be one of the set-up men. Makes me wonder if the Red Sox might still move him before spring training, because you know he can't be happy about that. The Sox have a crowded bullpen, now with Hanrahan, Bailey, Daniel Bard, Junichi Tazawa, Koji Uehara, Craig Breslow, Franklin Morales, Clayton Mortensen, Alfredo Aceves and Andrew Miller.

The Sox also made the Stephen Drew deal official.

Mike Napoli? Who knows what's going on on that front. They agreed to terms nearly a month ago, and still haven't made it official, due to some contract language regarding Napoli's injured hip. And Adam LaRoche is still out there.
Posted by The Omnipotent Q at 11:06 AM