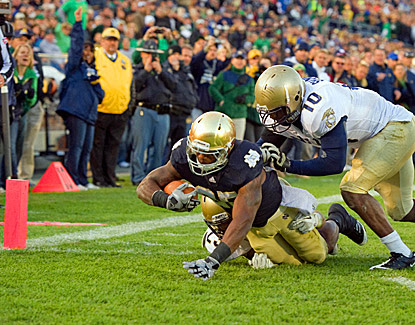 Notre Dame's longtime rival Navy had been giving the Fighting Irish some real headaches over the past few years, as Navy had won 3 of the last 4 meetings.

But the Irish took out their frustrations early after the tough loss to USC last week. They scored early and often, as Jonas Gray (pictured) and Cierre Wood scored first quarter touchdowns, and ND was off to the races.

It was 35-7 at halftime, as both Gray and Wood scored their second TD in the second quarter. Michael Floyd caught a 56-yard TD from Tommy Rees, and the rout was on.

Both Floyd and Gray scored TDs in the third quarter, and the regulars took the fourth quarter off. Rees went 16-for-22 for 237 yards and 1 TD (a second TD was ruled a rush by Floyd, as he caught his second TD behind the line of scrimmage).

The last Irish TD was scored on a 0ne-yard run in the fourth by freshman George Atkinson III, grandson of the Oakland Raiders defensive back.

The next meeting between Notre Dame and Navy will take place in Dublin, Ireland next season.

The 56-14 romp makes ND now 5-3 on the season, and they take on Wake Forest next Saturday night in North Carolina.
Posted by The Omnipotent Q at 11:43 AM