Bobby D Has Played Many a Storied Character 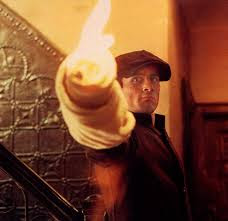 Trivia Night at Professor Thom's tomorrow night will feature "October 18th Trivia," seven questions about that date in history, as the Special Category. And the Q Train lightning round is "Robert DeNiro Characters Trivia," as I will give you the names of 10 characters the Oscar-winning actor has portrayed in his legendary career, and you have to tell me what movie that character is from. (Why Robert DeNiro? I say, "Why not?")

The Sneak Peek question for this week is:
The daiquiri cocktail is named after a town in what Caribbean country?

We get started just after 9 PM on Tuesday night. It will be the first time in six months we won't have a baseball game to worry about tomorrow, as the World Series doesn't begin until Wednesday. Hope to see many of you on Tuesday night.
Posted by The Omnipotent Q at 11:12 AM