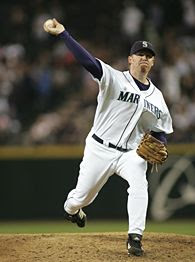 The Mets pulled off a blockbuster, three-team trade last night with the Seattle Mariners and Cleveland Indians, and continued the blowup of last year's awful bullpen, as they acquired one-time Mariners closer J.J. Putz (pictured), setup man Sean Green (not to be confused with the retired outfielder of the same name but a different spelling) and outfielder Jeremy Reed.

This is a terrific trade for the Mets. They finally moved Heilman, who figures to start in Seattle. Chavez was a good fourth outfielder who'll always be remembered for that amazing catch in the 2006 NLCS against St. Louis. Green is a good setup man who'll see most of his action in the seventh and will give the Mets some valuable middle innings. They will have to convince Putz to accept the eighth inning role to setup Francisco Rodriguez, as Putz still wants to close.

The Red Sox tried to get Reed three years ago after Johnny Damon left, but wound up trading for Coco Crisp instead. Reed has never really hit much in his stints in Seattle, but has a good glove and figures to have a shot at being a fourth outfielder, replacing Chavez in that role.

The Mets still have some work to do, but they've made some great strides to put 2008 in the rearview mirror. I've been a critic of Omar Minaya, but I'll give the credit where it's due and he's done a nice job so far this winter.

I also heard this morning that the Melky Cabrera Era in the Bronx is now over, as the Yankees sent the overrated outfielder to Milwaukee for Mike Cameron. Cameron is a decent pickup, as he's a good glove with some power, but doesn't hit for a high average. The Tampa Bay Rays also made a deal today, sending pitcher Edwin Jackson to the Detroit Tigers for young outfielder Matt Joyce. The deal paves the way for stud rookie David Price to pitch in the Rays rotation in 2009.
Posted by The Omnipotent Q at 10:36 AM

I was just going to mention the Melky for Cameron thing. I say this...SO WHAT! It's just a cold rain here, for now.

Just what the Yankees need, another player who was once suspended for drugs. (Cameron got 25 games for failing a test for amphetamines last season.)

By now, everyone knows how to pronounce his name, but could you imagine Putz taking the mound in New York as an unknown, and every Jewish fan seeing his name on the uniform?

Omar has awoken from his coma. K-Rod is a good deal at a good price.

JJ Putz is a power arm who can hopefully put last year's injuries behind him. Up to that point, Putz had been injury free.

Reed is an Endy clone so no great shakes. Heilman needed to leave NY, he had maxed out there two years ago.