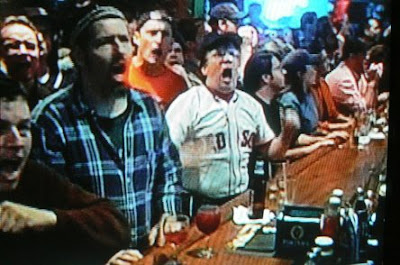 My pal Jere in Rhode Island had a post on his blog today about seeing me on the MLB Network channel and the preview they are running night and day featuring the 2004 World Series Film. Jere took a picture of me and the gang at the Riviera from his TV, as we are chanting "Let's Go Red Sox!" Around me are some of my friends who are also devoted Sox fans as well: Michael, Joe, Adam and Eric.

I look angry in the above picture but I can assure you it was during a Red Sox rally we are chanting (in the video it's the moments before the Red Sox win the World Series, but that's fine).

So if any of you have the MLB Network Channel preview, you can check it out any time before January 1st, as that's when the channel begins operation. It's running 24 hours a day, so you have about 7 or 8 chances to see it each day!

Thanks so much to Jere for taking the photograph.
Posted by The Omnipotent Q at 9:56 PM

That's a great shot, John. Boy, would have have fun watching a Sox game right there at the bar! Sounds like my kind of place...a Red Sox lover's haven, with beer! Hope your weekend is going great. WE WANT TEX! And the Sox are still in it bigtime.

I should have put the word "I" after the word boy, but you got my drift. I'll have a Becks on tap, please, and a Sox win. Thank you bartender.

Well, the Riviera WAS fun, but we abandoned that place early in 2005, and now the happening place in NYC to see the Sox is Professor Thom's. And I was proud to be there for the World Series win in 2007.

The Red Sox are definitely still smack in the middle of the Tex sweepstakes, and we'll see how soon it will conclude. (I bet very shortly.) Have a great weekend, Peter.

I guess without context it would kind of look like an angry mob--but it was just a very serious "let's go Red Sox."