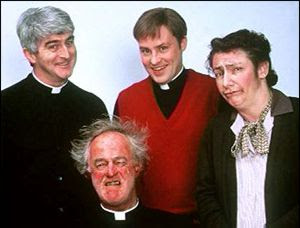 Three weeks ago, I had an accident, as many of you loyal readers may know. I spent a week on my couch in recovery, so I basically pulled out a lot of my old videos to pass the time. One of them I went back to was "Father Ted," one of the most brilliant comedies of all-time.

It isn't that widely known in the USA as it is in the UK. I first saw it on a flight on Virgin Atlantic going over to London about 10 years ago. I was in near hysterics the first time I saw it, and now I have all three seasons on video.

In America, it's had a run on PBS and BBC America (which I believe still shows it). It is the story of three priests and their housekeeper on a fictional island over the coast of Ireland called Craggy Island. They've been banished there for one reason or another. The priests are Ted Crilly, whose been exiled there over some funds that seemed to have found their way into his bank account; Dougal McGuire, a simple soul who is the dictionary definition of "the lights are on but nobody's home;" and Jack Hackett, an elderly drunkard whose vocabulary is basically limited to "feck," "drink," "arse," and "girls." They are supported by their faithful housekeeper Mrs. Doyle (we never know her first name), whose mission in life is to keep the priests in tea.

I'm sure some Catholics might have been offended by "Father Ted," but the show is basically a cartoon, and just about every episode is just a riot. (Even my dad, a diehard Catholic, thinks it's one of the funniest shows he's ever seen). I never found anything offensive about it as a Catholic, and I think there are times you just have to laugh at life. I found it a brilliant parody.

Ted is the "brains" of the outfit, and his ambition is to one day get off Craggy Island. (His dream is to get to Las Vegas.) My favorite episode is "Kicking Bishop Brennan Up the Arse." Ted loses a soccer match against some rival priests and has to kick Bishop Brennan, the hardass who sent him to Craggy Island, in the butt. It's hilarious how Ted tries to get Brennan in position to get a photo of him giving him a swift boot in the behind (pictured), and the aftermath when he does.

Dougal is a very lovable guy, but has the attention span of a fruitfly. Jack is an elderly, and rather disgusting man who lives for drink, and sits in his chair all day. They are Ted's partners in crime, along with Mrs. Doyle, whose catchphrase when offering them tea: "go on, go on" became one of the show's staples. (BTW, Frank Kelly, who plays Father Jack, did a really funny takeoff on the "12 Days of Christmas," which I put on my blog last December and is one of the most popular posts ever here. You can check it out by going here.)

The show ran for 25 episodes and three seasons, from 1995-98. The show was concluding its run in 1998 when sadly, Dermot Morgan, who brilliantly played Ted, suffered a fatal heart attack the day after the final show was completed. He is remembered as a one of Ireland's most respected comedians, and he died at the very young age of 45.

If you've never checked out "Father Ted" I would definitely recommend it. Here's more from Wikipedia. Thanks for the laughs, guys, at a time when I really needed it!
Posted by The Omnipotent Q at 12:00 PM

I hope you are feeling better.

I love Father Ted, I first came across it when I did a semester in Ireland in 1998. I was staying with this nice family in this small town just outside of Galway. The local pub, which was the center of the town's activity, was playing this show on one of their tv's in the back near the pool table. We Americans had no idea what it was about, but we were hooked from the first moment. Good times, thanks for the post it brought back some great memories.

Thanks for the kind words, Michael.

I guess Father Ted has that effect on people, like Monty Python. You watch them once, you're hooked as a fan!

One Thing's For Sure-Even In The Priesthood, we know there are Charachters, as in every profession:

I've even known a few characters in The Chancery at 75 Greene Avenue.

I never saw that show. I'm sure I'd love it. I adore British comedy.

It's actually IRISH comedy, Suldog. I saw an interview with the show's writers and they emphasized that point. Definitely check it out. Father Ted's available on NetFlix.