Tito's Staying in Boston Through 2011 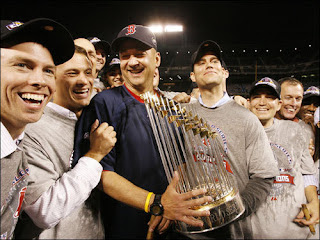 The Red Sox finally cleared up some major unfinished business as earlier today they extended the contract of Terry Francona, who is easily the best Red Sox manager in my lifetime, to a three-year extension, with two club options.

All the details have not been confirmed yet, but Tito will remain as Red Sox skipper through the 2011 season. An official announcement should happen soon. His current deal was set to expire after this season. It is believed the two-time World Series-winning manager will earn between $3 million and $4 million per year. This will make him the seond highest paid manager in the game, right behind the Dodgers' Joe Torre.

Great move by the Red Sox brass. It's great to know that they've finally rewarded Tito, for all of his hard work. He's a great handler of players and the media, and clearly deserved a corresponding boost in salary.

Congratulations, Tito. Glad you'll be around for at least another four years.
Posted by The Omnipotent Q at 4:44 PM