The 1964 Phillies: Still the Gold Standard 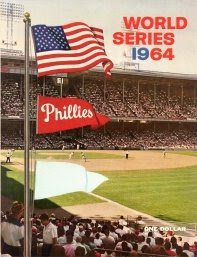 Over the last few weeks, as spring training is just getting underway, I have heard over and over again about how the late-season collapse of the 2007 Mets was the "biggest choke in baseball history." I've heard it on the radio (WFAN naturally), and read it in the papers.

Let's get one thing straight here. The Mets collapse last year was simply awful and it was historic. And those who say it was the worst in baseball history are either Mets haters or just don't know their baseball facts.

It was not the worst collapse in history. Not by a long shot.

The worst collapse or choke in baseball history belongs to the boys who play across town. You may remember that the New York Yankees needed to win only one game out of four in the 2004 ALCS to take the pennant and go to the World Series. The Red Sox only staged the greatest comeback in postseason history to win the pennant, and went on to win the World Series.

But if we are limiting our discussion to the regular season, the gold standard for collapses still belongs to the Philadelphia Phillies of 1964. (And don't EVER let anyone tell you the 1978 Red Sox belong in the discussion. They don't. But that's for another time.)

Before I get into it, there is one team who no one remembers for a really historic end-of-the-season collapse: the 1987 Toronto Blue Jays. They were up by 3 1/2 games with seven to play in the AL East, and lost all seven, including the last three to the Detroit Tigers to give them division on the last day. That collapse seems lost to history.

I looked at both the '64 Phillies and the '07 Mets, and the Phillies collapse is still much worse. The Phillies had what looked like a totally insurmountable 6 1/2 game lead on September 20 with just 12 games to play over both St. Louis and Cincinnati, having beaten the Dodgers in LA that day. The Phillies had been a pretty consisent team all year, and their longest lead all year was 7 1/2 in late August. Their longest losing streak of 1964 going into September was 4 games, and they were in first place for most of the year.

They returned home for a seven-game homestand against Cincinnati and Milwaukee. They lost the first game 1-0, and then their pitching simply got hammered the rest of the homestand and they lost the remaining six games by a combined score of 48-26. After the final Milwaukee loss, they dropped into second place one game back of St. Louis. The Phillies went to St. Louis for three and got swept, and the third loss eliminated the Phillies from the race. They lost 10 straight, and found themselves out and in third place. They beat Cincinnati the last two games, which eliminated the Reds and gave the Cardinals the pennant. It was small consolation to a team that appeared to be coasting into the World Series just two weeks earlier.

The 2007 Mets were seven games up in the NL East with 17 games to play on September 12. That was basically their high water mark for the season (they were also up by 7 in late August). The Mets then lost 5 straight (their longest losing skid of the year), and the Phillies found themselves only 1 1/2 back. The Mets then appeared to right the ship, winning four out of five, the only loss being an extra inning loss at Florida. On September 23, the Mets were up by two games, as the Phillies kept pace with them.

The last week of the season was the killer for the Mets. Three teams that were playing out the season came into Shea Stadium and beat them, Washington, St. Louis and Florida, and the Mets lost five in a row again, and found themselves one game out after Game 160. The Mets hammered Florida in Game 161 while the Phillies lost to tie the division going into the final game of the year.

The Phillies won while the Mets lost 8-1 at Shea to give the Phillies the division. That may very well be the worst and most infamous week in Mets history. It will never be forgotten.

But it is not the worst collapse in regular season. The Mets still had a chance to go to the postseason on the final day of the season, while the 1964 Phillies were eliminated with two games still to play, after losing ten straight games. (The Mets may have had a half-game lead larger than the Phillies when their collapse began, but the Phillies lost their lead a lot quicker, with less games left in the season. The Phillies final two wins were just a band-aid on a gaping wound.)

It will be interesting to see if what happened last year affects this year's team in a negative way. A World Series title will make Mets fans forget what happened last year, and make it a virtual footnote in history. (F'n Boone's home run to win the 2003 AL pennant is now totally overshadowed by the Red Sox historic comeback of the following season, for example.) It took the Phillies over a decade before they got back into a legitimate pennant race, as they finally won the NL East in 1976.

So if anyone says that the Mets collapse was the worst in history, tell them they are wrong.

No doubt, Q. The '64 Phils only had to coast home, but they crashed and burned. The worst, easily.

The Jays collapse hurt for sure but they made it twice 5 years later so we don't really care. Personally, I consider it the sophomore slump for the golden age of Blue Jays baseball.

But it still is a bigtime flopperoo...

WFAN-NOT a Place for Intelligent Discussion