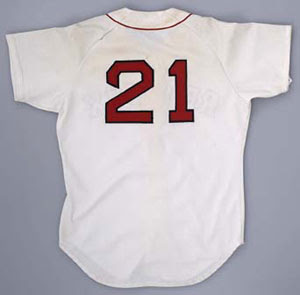 The fallout from the Roger Clemens steroid scandal has now been felt in another area: memorabilia.

I read in today's New York Post that the market for Clemens stuff has literally fallen through the floor. The Post reported that an autographed Clemens jersey from his Red Sox days (pictured) had a suggested asking price on eBay of $160.27, and it sold for the meager price of $18.75. A mint condition Clemens rookie card from 1984 had an asking price of $75, sold for just $3.99.

So, if you're holding on to any Clemens memorabilia, you'll be taking a serious bath if you try to move it now.

David Kohler, a memorabilia expert, was asked what could bring the Clemens stuff back to its former value. He had a very interesting reply.

Hey there. I don't have anyone to be sorry about. Those memorabilia (did I spell that correctly?) holders will have to wait, I guess.

I hope everthing is going great..Peter

Thanks for checking in, Peter. Hope you are doing OK. I feel sorry for no one in this whole mess also...