Lowell to the Rescue 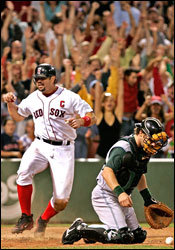 Before last night, the Red Sox had won just one game they had been trailing after 8 innings, and that was the "Mother's Day Miracle" game when they came back from a 5-0 deficit in the bottom of the ninth to win, 6-5 over Baltimore. So they were overdue for a dramatic win.

The Sox were down, 1-0, going into the ninth. With one out, Mike Lowell blasted a 2-0 pitch from Al Reyes (Remember him? He's the guy who hit Nomar Garciaparra in the wrist with a pitch in late 1999, and it cost him most of the 2001 season) way over the Green Monster seats to tie the game at 1. Jason Varitek later doubled, and scored the game winner when Coco Crisp singled him in (pictured). It was a huge win for the Sox, as the Yankees were slaughtered in the Bronx by the Orioles, 12-0, so the Sox are now 5 games up once again.

I missed most of the game, as I was having dinner with a dear friend in Brooklyn. So my cell phone was my source for information. (I can't tell you how happy I was to see a "2" in the Red Sox game summary as we were enjoying a pleasant night out.) I could see that the Red Sox were once again having trouble with their nemesis, Scott Kazmir. They couldn't get a run off of him, but they made him work, and got him out of the game in the seventh. Jon Lester was simply tremendous in seven terrific innings, allowing just a run on two hits in an emotional return for him to Fenway Park for the first time in nearly a year.

And in a very good turn for the club, Eric Gagne pitched a solid ninth inning, striking out the side, and got his third win of the season. I was glad to see Terry Francona bring him into that situation, and shortly after the terrible weekend he had. I am of the opinion that Gagne will be fine (and long as he's not hiding any kind of injury).

It was simply one of the most dramatic wins of the season. (Probably the third most dramatic, after the Mother's Day comeback and the April comeback against the Yankees at Fenway.) We hadn't seen the Red Sox celebrating on the field much lately with those kind of wins. And it sure wouldn't hurt to see it happen a little more often.
Posted by The Omnipotent Q at 12:02 PM