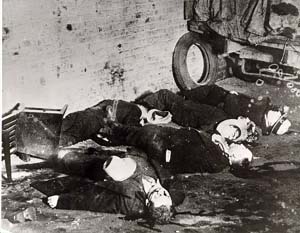 It was a quite a weekend for the Red Sox, as they took the Chicago White Sox out to the woodshed and gave them a beatdown of historic proportions. (The White Sox pitching staff, or what's left of it, is shown in the picture above after today's loss.)

The Red Sox completed a four-game wipeout of the White Sox, 11-1, today at US Cellular Field. They beat Chicago in every facet of the game, and served notice to all the AL contenders, and especially to the team chasing them in the American League East, that they are the premier team in Major League baseball right now.

David Ortiz, J.D. Drew and Bobby Kielty all hit home runs, and Julian Tavarez pitched six solid innings in completing the sweep. The Red Sox won their 80th game, and are now 6-1 on the current 10-game road trip they are on, and with New York's loss to the Tigers in Detroit, now have a 7 1/2 game lead in the American League East.

The Red Sox outscored the White Sox, 46-7, and it was worse then the beating the Red Sox took at Fenway in September 1978 against You-Know-Who. The Red Sox scored ten or more runs in each of the four games, and it's the first time they've done that since June of 1950, when the Red Sox scored over 1,000 runs and were the last MLB team to hit over .300 in a season (.302 to be exact). It was just the fourth time in MLB history that a team scored ten runs in each game of a four-game series. It was also the most runs the Sox had scored in a four-game series since 1949 against the St. Louis Browns.

It was simply a glorious weekend for the boys from Boston. They got four quality starts from their starters. Josh Beckett allowed three runs in the first 5 2/3 innings in Game 1, and in the final 30 1/3 innings, they allowed just four runs, and they all came on three home runs.

The Sox scored an amazing 21 runs in the series from the 7th inning on. Three of the four games were actually close at the sixth inning, but the Red Sox turned it on near the end and just pummeled Chicago. They beat their two best pitchers, Javier Vazquez and Mark Buehrle, after both had gotten off to good starts in their respective starts.

My friend Adam also sent me an email tonight with some interesting facts about the Red Sox and Yankees right now. The Sox now have a better record than New York in the month of August (Sox are 16-9, Yankees are 15-9), and the Red Sox now have a better record in the second half than they did in the first half (.614 winning percentage in the second half, .609 in the first). Not bad for a team that was supposed to be "slumping," eh?

They are putting it all together at exactly the right time. This weekend was very much one of "kicking ass and taking names." New York plays the Tigers at Comerica Park tomorrow night to complete their four-game series. The Red Sox lead will either be 7 or 8 games when the first pitch is thrown at Yankee Stadium between the Sox and Yankees Tuesday night.

The Yankees are on notice. The Red Sox are on the way.
Posted by The Omnipotent Q at 10:44 PM

Funny, but how The White Sox fell so far in such a short time