It was Bobby Doerr Day at Fenway Park, and the classy Red Sox Hall of Famer was honored 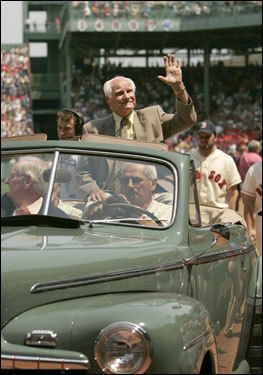 with a ceremony before the game (pictured). He came out in a vintage car to the applause of the sellout crowd. It was 60 years to the day that Bobby was first honored with a day at Fenway Park.(I like the fact he singled out Dustin Pedroia in his short speech to the fans.)

The Red Sox then went out and beat the orioles, 7-4, to take the series, as they head off to the West Coast for one week. Tim Wakefield became the third Red Sox pitcher to win 150 games with the team (joining Cy Young and The Traitor). He pitched seven innings, gave up three runs in getting the win on his 41st birthday.

Eric Hinske and Doug Mirabelli hit homers (and my Site Meter numbers jumped considerably, as I had nearly 200 hits yesterday). Mirabelli had three hits and a walk, easily his best game of the year. He had a clutch hit in the four-run seventh that put the game away. But in the sixth, he made a goof that might have cost the Sox the game. He was on the third with the bases loaded and the game tied. David Ortiz hit a deep fly ball to right in the front of the track that should have scored Mirabelli easily. But he thought he left early, so he went back to tag again, and was out easily at the plate. I guess no one was happier that the So0x won yesterday than Doug.

Eric Gagne pitched the ninth, and received a huge ovation from the Fenway throng. He struck out the first two hitters, than gave up a bloop double next to the third base line and than a run scoring single before getting the final out. Nice start to his Red Sox career, however long it lasts.

It was a tremendous day, watching the Red Sox win, the Indians gain more ground on their Wild Card lead as the Yankees lost, and the Mets won in Milwaukee. (And A-Rod and Barry Bonds still haven't reached their milestone numbers.)

And it was nice to hear from my dad by cell phone, who was in "The Friendly Confines" of Wrigley Field for the first time with my mom and a number of my other relatives as the Phillies beat the Cubs.
Posted by The Omnipotent Q at 12:24 PM